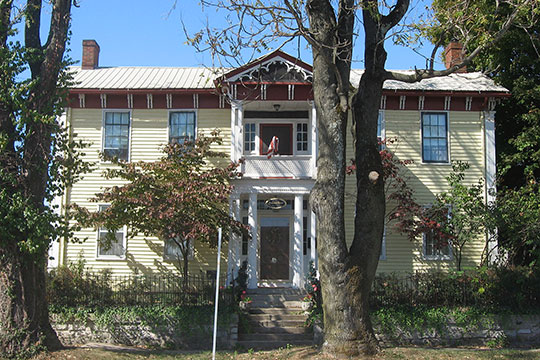 Spencer, seat of Owen County, was named for a Captain Spencer of Kentucky who was killed in the Battle of Tippecanoe. Farming, coal mining, and quarrying are the principal industries of Spencer. A large printing establishment employs many of the town's residents. The business buildings are low and rambling and the atmosphere is that of a quiet, county-seat town.

Spencer was the home town of two American poets. At Franklin and Short Streets is the House of William Herschell [1873-1939], whose most famous poem is "Long Boy," a popular World War I song. The birthplace of William Vaughn Moody stood on the site now occupied by a white house adjacent to the post office on Washington Street. Moody [1869-1910], dramatist, poet and educator, was best known for his play, The Great Divide.

Just south of the library on Washington Street is a house built around, and using as one of its rooms, the old log courthouse, erected in 1820. Before this courthouse was built, Spencer's first trial was held under the trees of the public square. At this trial, Thomas Adams, first resident lawyer, ended an argument with the opposing counsel by knocking him down with a law book.