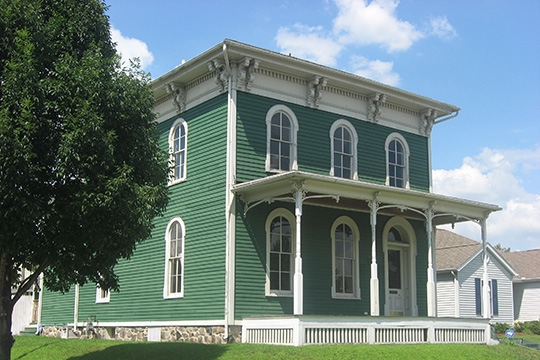 Situated in a rich farming, dairying and fruit-raising area, South Bend also is the center of an important mint-growing and mint-distilling section. Its industrial importance, coupled with the presence of Notre Dame University, gives it a thriving, energetic, cosmopolitan atmosphere unusual in the Midlands. It has been shaped for more than 90 years by the creative influence of two great industries that settled here—the Studebaker plant and the Oliver Farm Equipment Company.

Downtown South Bend is a bustling business center, locally called Michiana because it is the trade and financial heart of southern Michigan and northern Indiana. The center of activity lies at Michigan and Washington Streets. Most of the streets are usually crowded and noisy. Most of the office buildings are from five to eight stories high, with the exception of the Building and Loan Tower which is twelve. In weekends during the collegiate football season the town is crowded with visitors who come to see Notre Dame teams in action. Crowds often number 60,000 and tax hotels and rooming facilities to capacity. The skyline of the western and southern sections of the city is broken by the stacks of many factories, an impressive industrial scene. Here more than 25,000 people are employed with an annual payroll of about $40,000,000. South Bend has long been the scene of great industrial and commercial activity and is widely known for the production of aircraft and aviation devices, sewing machines, fishing tackle, automobiles, farm machinery, and farm implements. All the larger industries are unionized, either in the A.F. of L. or the C.I.O.

Surrounding the more than 150 factories are the homes of thousands of foreign-born employees: Poles, Hungarians, Belgians and many other nationalities. Most of these houses are kept in good condition, with a small lawn in front and often a carefully tended vegetable garden in the rear. South Bend has no slum district, and of the 25,000 dwellings in the city about 70% are owned by their occupants.

More than 15,000 Poles live here, chiefly in the western and southwestern sections of the city. They maintain their own churches, parochial schools, mercantile establishments, and one newspaper, printed in Polish. Preserving many of the traditions and customs of their homeland, they partake, on Christmas Eve, of the oplatek, a thin wager with the outline of the Manger impressed upon it; and observe the ancient dyngus rite, in which men switch the women's legs with twigs and sprinkle the women with water on Easter Monday. Food for the Easter feasts is blessed by the priests. The outstanding Polish celebration is an annual field day in the summer, including gymnastics, music and speeches.

Other racial groups also contribute to the cosmopolitan character of South Bend. Four thousand Negroes live here, with their own welfare agency and community house at Dunbar Center, 732 Western Avenue. But perhaps the most colorful group are the Hungarians. About 10,000 have settled just southwest of the center of the city where they support Indiana's only Hungarian newspaper, Varosi Elet, two Roman Catholic churches, and one Presbyterian. Their social life centers in two church halls and in the Verhovy Home. For their Harvest Dance they gather in native costume to dance the czarda, adopted by their ancestors from the dances of the wandering gypsies of their homeland.

The north and east sections of the city are given over to residences ranging from comfortable cottages and bungalows to mansions set in spacious, landscaped lawns. In the northern portion of the town along Michigan Street (US 31) are many stately old houses, particularly in Navarre Place. Curved residential streets, tree-lined and quiet, lead to the river. Along its northern bank is North Shore Drive, with many of the city's finest old houses. Just where the drive leaves off from the highway is the spot where Pierre Navarre built his first log cabin in 1820. Nearby on the drive is the crown of a hill that affords an excellent view of the city and river, as well as the morainal hills to the south.

Civic leaders are conserving the city's natural beauty spots: Rum Village Park is a tract covered with virgin timber on the southern edge of the city, named for Chief Rum of the Patawatomi Indians, who once maintained a village here; retaining walls, both picturesque and utilitarian line the St. Joseph River between South Bend and Mishawaka; and a beautiful boulevard parallels the river connecting the two sister cities. (Although separate municipalities, South Bend and Mishawaka are virtually one. There is no physical line of demarcation.)

South Bend claims to be the first city in the United States to enforce a law requiring all commercial food handlers to take a Wasserman test; public health work in general receives much attention. Scattered over the city are 120 established churches. There are 19 public elementary schools, 2 schools for the mentally and physically handicapped, 10 junior and 3 senior high schools, 14 parochial elementary schools, and 2 parochial high schools. At the northern city limits, and visible from practically every vantage point, is the great golden dome of the Administration Building of the University of Notre Dame.

Near this point, on December 5, 1679, Rene Robert Cavelier, Sieur de la Salle, man of letters and explorer, made a portage between the St. Joseph and Kankakee Rivers and continued on his way to the Illinois, the Mississippi and the unexplored western waters. On a second trip in May 1681, La Salle met with the chiefs of the Miami and Illinois confederations under a tree known as Council Oak, which still stands in 1941 in Highland Cemetery. At this meeting he brought about a treaty of peace between these nations that banded together against their common enemy, the savage Iroquois from the east. This alliance of the Miami and Illinois with the French against the eastern tribes that were backed by the English had far-reaching consequences in the development of the fur trade and the history of this region.

The first white man to make a permanent home in what is now St. Joseph County was Pierre Freischutz Navarre, and educated Frenchman who arrived in 1820 as an agent of the American Fur Company and established the first trading post in this section. He married a Potawatomi who tradition represents as having been exceptionally intelligent. When the Potawatomi were removed to the West in 1838, Navarre went with them but returned and died in 1864 at the home of one of his daughters in South Bend. Both Navarre Place and Navarre Street perpetuate his name.

Alexis Coquillard, the founder of South Bend, first named the site Big St. Joseph Station to distinguish it from a trading post operated by relatives on the Little St. Joseph River near the present site of Fort Wayne. Settlers however soon dubbed the post The Bend, or South Bend. In 1823, Coquillard, a man of energy and force, persuaded his father-in-law, Francis Comparet, to become his partner and invest a sum said to have approximated $75,000 to the purchase of the agency of John Jacob Astor's American Fur Company for the region of the Upper Lakes.

Four years later Colonel Lathrop M. Taylor opened a trading post for Samuel Hanna & Company and became a friendly business rival of Coquillard. In 1827 Colonel Taylor renamed the settlement St. Joseph's and in 1829 the name was changed to Southold. Finally and officially, in 1830, the Post Office department named it South Bend.

Working together, Coquillard and Taylor laid the foundation of South Bend's industrial future. Ferries, dams and mills resulted from their efforts. They encouraged settlers with gifts of money and land and, in 1831, after laying out the town site, brought about the selection of South Bend as the county seat.

Henceforth the town's growth was steady. But it was slow until 1852 when Henry and Clement Studebaker came to South Bend. With $68 and two forges they opened a blacksmith and wagon shop, forerunner of the extensive Studebaker Corporation of today. Building farm wagons, fine carriages, prairie schooners for western emigrants, and, later, automobiles, they served a world-wide market and laid the basis for South Bend's future prosperity.

Further industrial impetus was given to the town by the rise and growth of the Oliver Chilled Plow Works. In 1855 James Oliver came to South Bend and in the following year joined with T.M. Bissel who had been in the plow manufacturing business in Ohio, and George Milburn in the manufacture of plows under the name of Oliver, Bissel & Company. Later a stock company was formed under the name of the South Bend Iron Works. It subsequently passed into the control of James Oliver and eventually became the Oliver Chilled Plow Works. In 1864 Oliver discovered a process for chilling and hardening steel so that the curved moldboards of plows could be made of steel instead of the softer iron formerly used. This plow would remain sharp for a long time, and the moldboard would not become encrusted with sticky earth. Today the Oliver Plow is known the world over. Together with the Studebaker wagon, it played no small part in the agricultural development of the Nation.