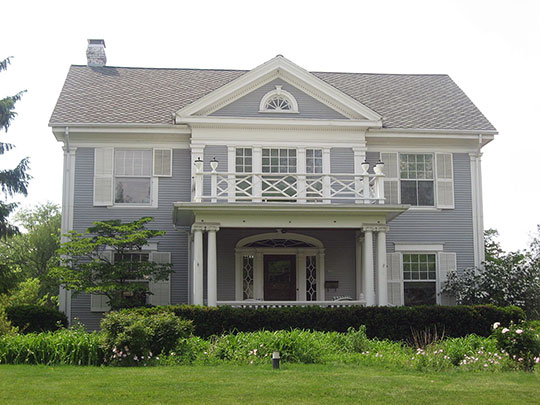 Wabash was platted in April, 1834 as "Wabashtown" by David Burr and Hugh Hanna. The platting was directly connected to the construction of the Wabash and Erie Canal. Colonel David Burr was a Commissioner for the construction of the canal and was well aware of the land purchased for the canal route in 1832-1833. The plat was laid on the north line of the canal bed with a provision for docks, which were located at the southern corners of street intersections along Canal Street. One of these areas within the district is currently occupied by the Bradley Block. The first sale of town lots too place just 24 hours after the bids had been let for construction of the canal in May, 1834. Early commercial establishments were begun within a few months on Canal Street by Hugh Hanna, who established a dry goods store, among others.

At this time Wabash was a smaller settlement than Lagro, which was located further east along the canal and was platted by John Tipton. However Wabash was selected as county seat in 1835, partially due to an offer made by Hanna and Burr to provide a courthouse site and construct a suitable building. This courthouse was completed in 1839.

Wabash grew slowly but steadily in the 1830s and 1840s. The Wabash and Erie Canal reached the town in 1837 and was completed to Lafayette in 1843. By 1840 the town boasted five brick buildings, primarily commercial, located along Canal Street. In addition to these masonry structures there were numerous log cabins which served as residences and shops. These buildings were located mainly along Canal Street. In 1846 the first newspaper, The Upper Wabash Argus, began publication, and in 1849 telegraph lines were strung along the canal route. Wabash was first incorporated on January 16, 1849.