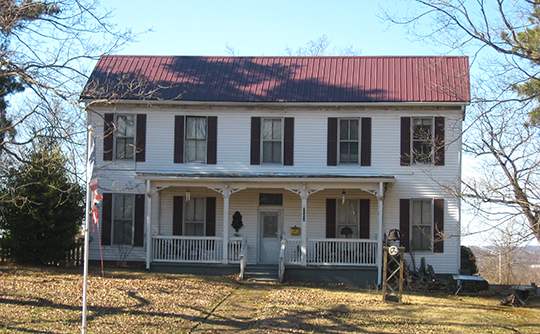 Hopkinsville was founded in 1797 when the Christian Quarterly Court selected the site for their county seat. The site was chosen because it would include the Russellville and Ohio River Trail crossing at the North Fork of the Little River. It was also advantageous to have the county seat near the two forks because the rivers were major water highways. Five acres were given to the county for the court house by Bartholomew Wood. Wood and his wife Martha were the area's first Anglo American settlers and they claimed 1000 acres between the North and South Fork of the Little River in 1796. It was on Wood's property that the first thirty acres of Hopkinsville were platted. The town was laid out along the Russellville Road and bounded on the west by the Little River. Originally the town was named Elizabeth after Wood's eldest daughter, however in 1804, the town was renamed Hopkinsville by the State Legislature. The name was chosen to honor General Samuel Hopkins, a Revolutionary and War of 1812 veteran who resided in Henderson County. [comdev-services.com, accessed February, 2017]