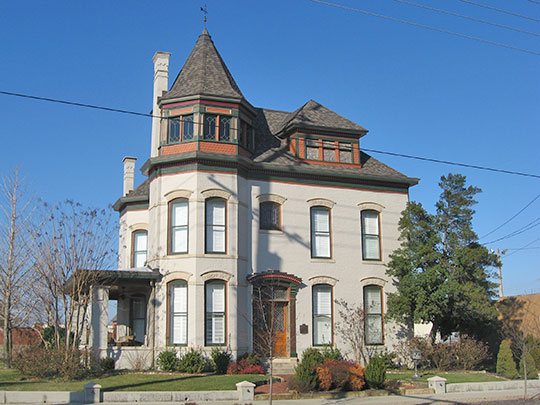 Owensboro, second largest city in western Kentucky, is a bustling oil town on the bank of the Ohio River. It is in an agricultural area at the northern edge of the western Kentucky coal fields. Owensboro was first known as Yellow Banks, because of a six-mile stretch of unusual yellow clay on the banks of the river here. In 1815, when Daviess County was formed, Yellow Banks was chosen county seat and its name changed to Rossborough to honor David Ross, the owner of much property. A charter granted in 1866 renamed it Owensboro for Col. Abraham Owen, a Virginian who came to Kentucky, took an important part in the early Indian wars, and fell at the Battle of Tippecanoe. Daviess County was named for Col. Joseph Hamilton Daviess, also slain in the Battle of Tippecanoe. Colonel Daviess—who married Nanny Marshall, sister of John Marshall, Chief Justice of the United States—had moved to this section in 1806 and had settled on a 5,000-acre tract on a ridge overlooking the Ohio River. Here he built Cornland, a beautiful two-story brick house. The first lawyer from the country west of the Allegheny Mountains to appear before the U.S. Supreme Court, Colonel Daviess was appointed U.S. District Attorney for Kentucky by President Thomas Jefferson. While holding this office Daviess attempted to bring Aaron Burr to trial on a conspiracy charge, but was frustrated by the absence of important witnesses and finally by the judge's denying Daviess the right to appear before the grand jury. By the time of the War between the States, Owensboro had become important as a river port, and a number of skirmishes took place here. In September 1862 a Confederate regiment, under Col. Robert M. Martin, entered the town, demanding unconditional surrender of the Federals under Colonel Netter, at near-by Camp Silas B. Miller. Colonel Netter preferred to fight. After a second skirmish had taken place at Sutherland Hill on the same day, the Confederate forces withdrew from this vicinity. When Owensboro was raided by guerrillas in August 1864 and partly burned, the courthouse was destroyed.

Daviess County is next to the largest tobacco-producing county in Kentucky. In Owensboro are two Loose-Leaf Sales Floors and eight factories for processing and grading tobacco. The city has also two large distilleries and factories making radio tubes and electric light bulbs.

The Planters' Hotel, 4th and Main Streets, was built in 1846. Among the signatures on its register are those of Jenny Lind, the singer, and Mary Anderson, Shakespearean actress.

On Griffith Avenue is the Griffith House, built by William R. Griffith in 1828. The large hand-made locks, bearing coats of arms, were brought from Philadelphia. The house is of Georgian Colonial design, but a modern front porch has been substituted for the original columned portico.