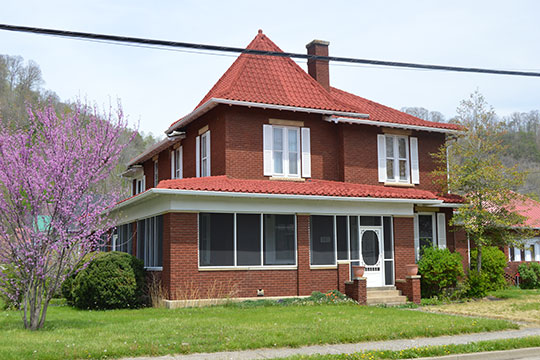 Paintsville, seat of Johnson County, was named for Paint Creek which flows through the town, and along which early settlers found many of the large trees stripped of their bark and embellished with drawings of birds and animals, painted in red and black on the smooth undertrunk of the trees. There were found also odd figures of buffalo and deer painted in red and black on the cliff-like sandstones of the creek gorge. Various undecipherable hieroglyphs were once visible near the drawings, but these have become obliterated by the weather during the last 40 or 50 years.

The town is on the site of Paint Lick Station, an old trading post. Indian traditions cling to this part of the valley, which was apparently a favorite burial ground of the Indians. On the hills surrounding Paintsville many graves and burial mounds have been found; and artifacts, such as pipes, tomahawks, pottery and beads have been taken from them. The Rock House, a natural rock formation with a circular opening cut to provide entrance, stands on a hill facing the river just north of the Concord Baptist Church. Such shelters, bearing evidence of Indian occupation, replaced wigwams in times of danger.