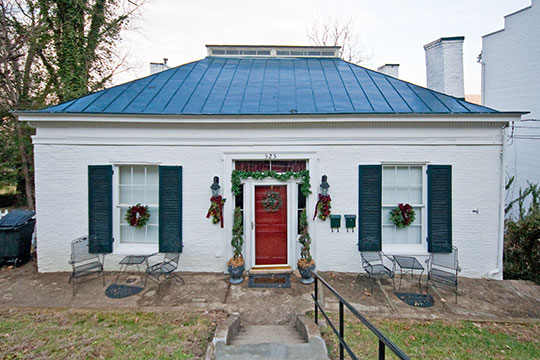 Maysville, as seen from the Ohio side of the river, resembles an Italian hill town, having been built on the steep slope of the riverbank, terrace on terrace, with gray walls and red roofs against a green background. The town, at the mouth of Limestone Creek, on a narrow flood plain, is leisurely and mellow, preserving the atmosphere of the old river days. Many of the handsome well-kept homes, on the sides of the bluffs, command a wide view of the sweeping bends of the river and the green hills and fields of southern Ohio. The town, first known as Limestone, was established by the Virginia Legislature in 1787, and by 1792, had become the leading port of entry of the State "well laid out and flourishing." Maysville's wealth was not in its land-property, but in the steamers on the river and the traffic they brought to it; and its industrial activity was entirely confined to shipping and ship building. In those days merchandise came down the Ohio River on barges to Maysville and most of it was hauled into central Kentucky, where the settlements were. The town changed its name from Limestone to Maysville to honor John May of Virginia, on whose land it had grown up.

At one time, probably in the spring of 1786, Daniel Boone and his wife opened a tavern here. They remained for three years, Mrs. Boone conducting the hostelry, while Daniel hunted and trapped as usual, and traded up and down the Ohio River.

Maysville has been the seat of Mason County since 1848, when the growth of river traffic caused it to forge ahead of Washington, the first county seat.