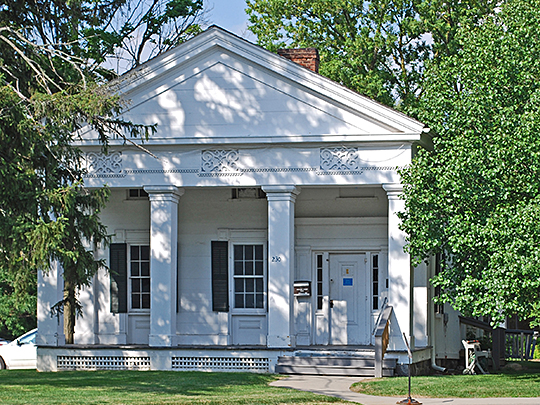 The first settlement in Washtenaw County was near Ypsilanti, in 1809, when Gabriel Godfrey, a Frenchman, accompanied by Francis Pepin and Louis Le Shambre, established a trading post. The building erected for this purpose stood upon the west bank of the Huron River. The next settlement was in the Spring of 1823. Benjamin Woodruff, Robert M. Stitts, John Thayer and David Beverly settled about one mile east of the present Ypsilanti. This settlement took the name of "Woodruff's Grove." Benjamin Woodruff, without a doubt, was the first white man to effect a permanent settlement in the county, though his claim was disputed by Eldridge Gee, who made, in 1875, the following statement to John Geddes and published in the county papers at the time. "I first visited Washtenaw County in 1822, in the month of June, in company with Epaphras Matteson (my father-in-law), Joseph Young and Giles Downer. We started from Mrs. Downer's house on the Rouge. The first night we put up in the French trading house. We took the river trail and went to where Mill Creek runs into the Huron River. We then came back to where Ann Arbor City now is, and from there to Saline, and from thence back to the French trading house, and from thence to Mrs. Downer's. There were no white persons then residing in Washtenaw. The trading house had no occupants. In February 1823, I moved to Washtenaw County. I hired three men on the Rouge to help me through. We camped out three nights. On the fourth day I got to where I thought I would stop. It was on the east half of the northeast quarter of section 33, township 2 south, 7 east. I first built a shanty of some boards I brought along, and in about six weeks built a house. It was on the 14th of February when I got to where I built." [1]