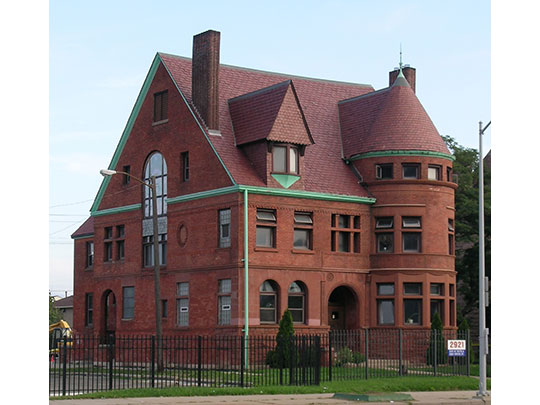 Detroit was founded by Antoine Laumet De La Mothe Cadillac. He was born March 5, 1658, at St. Nicolas de la Grave, in the Department of Tarn and Garonne, France. The old parish records show that he was baptized when five days old by Rev. Father John Boscus, under the name of Antoine Laumet, and that he was the son of "Jean Laumet, Advocate in the Court, and of Jean Pechagut, married." The date Cadillac's arrival in the New World is unknown. It is said that he had previously served in the army, and he seems to have held the rank of lieutenant when he came. In 1688 he was styled, in official documents, a Knight of the Royal and Military Order of St. Louis. Our history of him in America begins with his marriage at Quebec, on June 25, 1687, to Marie Therese Guyon, a native of that city, daughter of Denis Guyon and Elizabeth Boucher. In 1689 Governor Menneville designated him as a resident of Acadia, and said he had a habitation there; Quebec at that time was within the limits of what was styled Acadia.

In 1802 the "Northwest Territory" laws enabled the incorporation of the "Town of Detroit," vesting the government in a 5-person Board of Supervisors. In 1806 the Territorial laws provided for incorporating the City of Detroit with a Mayor to be appointed by the territorial governor, and a City Council composed of two chambers of three members each, to be publicly elected.