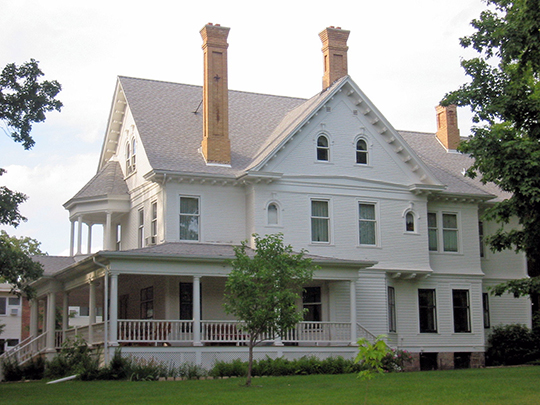 Construction of the Northern Pacific Railroad through the center of the county in 1870-71 brought dramatic changes to the wilderness. Aitkin, a station point at the railroad's nearest proximity to the Mississippi River, became the county's first permanent white settlement. The railroad's arrival also stimulated development of the previously insignificant logging industry which, in turn, resulted in substantial river commerce on the Upper Mississippi between Aitkin and Grand Rapids. Aitkin, as the northernmost settlement on the Mississippi River, became the supply base for all logging operations on the northern reaches of the Mississippi. Supplies were shipped by rail and then transported by steamboat to the camps or Grand Rapids. Aitkin continued to serve as the principal supply base for logging operations on the Upper Mississippi until 1890 when the Duluth and Winnipeg Railroad connected Grand Rapids with Duluth.

For several years after the county's organization in 1872, the fledgling supply base of Aitkin and the numerous logging camps comprised the entire white population. In 1880 only 366 individuals, the vast majority of whom were loggers, resided in the county; many of this population were of Canadian origin. One hundred thirty-six people lived in Aitkin and a few at Kimberly Station several miles east of Aitkin. Thirteen farms, primarily located on the Mississippi alluvial plain in the vicinity of Aitkin, had been developed.