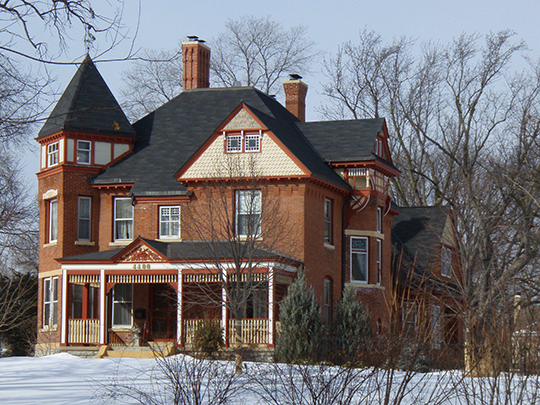 Hennepin county, established March 6, 1852, commemorates Louis Hennepin, the Franciscan missionary, explorer, and author, who was born in Ath, Belgium, about 1640, and died in Holland about 1701. He entered the order of the Recollects of St. Francis, probably in his early youth; spent many years in services of that order in France, Belgium, Holland, Italy, and Germany; and was present, as a regimental chaplain, at the battle of Senef, in 1674. The next year he sailed to Canada, in the same ship with Laval, the bishop of the newly established see of Quebec, and La Salle, destined to be the greatest French explorer of the New World, arriving, at Quebec in September. In 1678 Hennepin joined La Salle's expedition for exploration of lakes Ontario, Erie, Huron, and Michigan, and the Illinois and Mississippi rivers.

By direction of La Salle, whom he left near the site of Peoria, Hennepin descended the Illinois river with two companions in a canoe, and thence ascended the Mississippi. On their way up the Mississippi they were captured by a band of Sioux, living near Mille Lacs, spent eight months with them, and were rescued by Du Luth, who enabled Hennepin to reach Green Bay. In the midsummer of 1680, after the early part of their captivity by the Sioux in the region of Mille Lacs, Hennepin and one of his French companions, Anthony Auguelle (also called the Pickard du Gay), were the first white men to see the Falls of St. Anthony, which Hennepin named in honor of his patron saint, Anthony of Padua.

He returned to Quebec in 1682, and to Europe soon afterward. In 1683 he published in Paris an account of his explorations, entitled "Description de la Louisiane." A translation of it, by John Gilmary Shea, was published in New York in 1880, with dedication to Archbishop Ireland and John Fletcher Williams, who were respectively the president and secretary of the Minnesota Historical Society. This volume has an introductory notice of Father Hennepin and an account of his published works, in 45 pages; and the main translation is followed by others from La Salle and Du Luth, and by a bibliography of Hennepin's works and their many editions and translations.

Extensive quotations from Shea are given in chapter VII (pages 205- 241) in volume I of "Minnesota in Three Centuries," published in 1908, which narrates the explorations of Du Luth and Hennepin in the area of this state, with biographic sketches of these great pioneers of New France. Two hundred years after Hennepin visited and named the falls of the Mississippi at the center of the present city of Minneapolis, a great celebration was held there by the Minnesota Historical Society and the people of the Twin Cities, on the grounds of the State University, within view of the falls, on Saturday, July 3, 1880. The description of this Hennepin Bi-Centenary celebration, and the addresses of Governor C. K. Davis, Governor Ramsey, General W. T. Sherman, and Archbishop Ireland, with a poem by A. P. Miller, are published in the M. H. S. Collections (volume VI, pages 29-74).

The name of Hennepin, instead of Snelling, which latter had been proposed by Colonel John H. Stevens in the original bill, was adopted for this county on request of Martin McLeod, member of the Territorial Council.