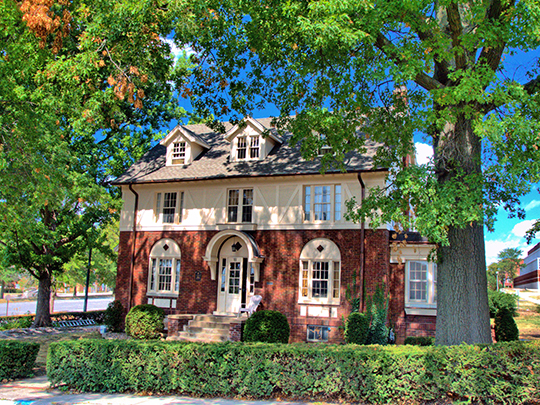 Chartered as a town in 1857, the City of Kirksville was soon to become the trade center for NE Missouri. Ten years later, Joseph Baldwin established his North Missouri Normal School & Commercial College which would become the 1st District State Normal School & later known as Northeast Missouri State University. The railroads arrived in Kirksville in 1868 & 1872 at which time the city's commercial ventures prospered. The next major in crease for the town developed around the establishment of Osteopathic Medicine. Dr. A.T. Still returned to Kirksville in 1875 & soon had a thriving practice. He also traveled around the State explaining his theory & treating patients. As his fame grew, so grew the City of Kirksville. Several hotels & boarding houses were erected to handle the large number of patients crowding the Kirksville community.

Before Kirksville was laid out the vicinity was known to some as Long Point, and to others as Hopkinsville. By 1841, when the town was laid out, there were a few settlers living in the vicinity, among whom were Jesse Kirk and David E. Sloan. Mr. Sloan had settled first in Walnut Township, but moved his family to what is now Kirksville in 1840 and built a log cabin. The tradition is to the effect that his house was the first one ever built within the limits of the original Kirksville.

Besides the Kirk and Sloan families, there were during the 1840s representatives of the Stewart, Floyd, Holloway, Parcells, Callison, James, Sheeks, Ivie, Hunsaker, Dodson, Mulanix, Goode, Murphy and Galyen families in Kirksville.