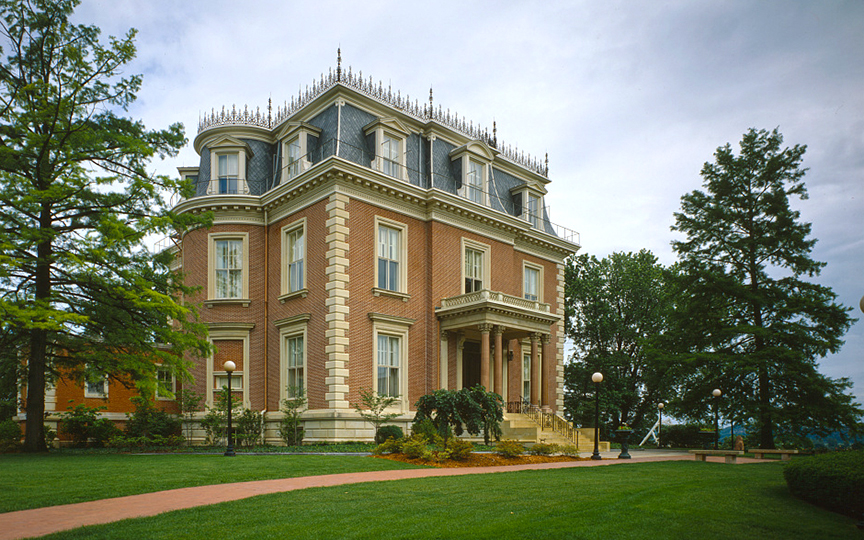 Missouri [†] gets its name from a tribe of Sioux Indians of the state called the Missouris. The word "Missouri" often has been construed to mean "muddy water" but the Smithsonian Institution Bureau of American Ethnology has stated it means "town of the large canoes," and authorities have said the Indian syllables from which the word comes mean "wooden canoe people" or "he of the big canoe."

Missouri was admitted as the 24th state in 1821; the state capitol was located in St. Charles until a permanent location was designated. In 1826 Jefferson City was designated Missouri's permanent seat of government; all state records, equipment, and the Great Seal were moved to Jefferson City on October 1st.

About the Governor's Residence

Serving as the home of Missouri's governors since 1871, the executive mansion is also a fine example of Second Empire architecture in Missouri, designed by noted St. Louis architect George Ingham Barnett. Born in Nottingham, England, Barnett [1815-1898] was educated and trained in architecture under Sir Thomas Hine in London. He immigrated to the United states in 1839 and opened an office in St. Louis, where he practiced for 50 years. He was one of Missouri's first professionally trained architects. Jefferson City's Gottlieb Martin built the mansion. It has always been owned by the State of Missouri. Standing on the northwest corner of Madison and Capitol Streets, the mansion faces southeast and is situated on a bluff overlooking the Missouri River to the northeast and east. [Holly K. Chamberlain, historian, Historic American Buildings Survey, 1988, memory.loc.gove, accessed August, 2011.]