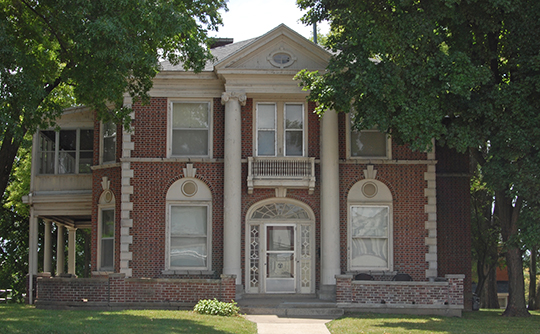 Jefferson City holds the distinction of having been created specifically to serve as the state capital by a commission appointed by the Missouri state legislature in 1821. But until government buildings could be constructed, the town of St. Charles served as the capital.

Jefferson City was laid out by Daniel Morgan Boone, the son of the frontiersman. It was named for U.S. President Thomas Jefferson, who served from 1801-1809. The town was incorporated in 1825, and the general assembly moved there in 1826. At that time, the town had thirty-one families, a general store, a hotel, and a few other buildings.

For several years, other towns attempted to have the capital city changed, and in 1832 Governor John Miller suggested that a state penitentiary be built in Jefferson City to strengthen the town's position as capital. The prison was completed in 1836.

The next year, the Capitol burned and all the state records went up in flames. Five years later, a new statehouse was completed at the site of the present Capitol building. At that time, although pigs still wandered in the streets, modern steamboats regularly visited the city and stage coach routes brought travelers. These facilities encouraged the growth of local industries, including grist mills, flour mills, tanneries, and distilleries. The 1830s saw the influx of German immigrants, who were mostly farmers.

See photo; listed on the National Register of Historic Places in 1969.