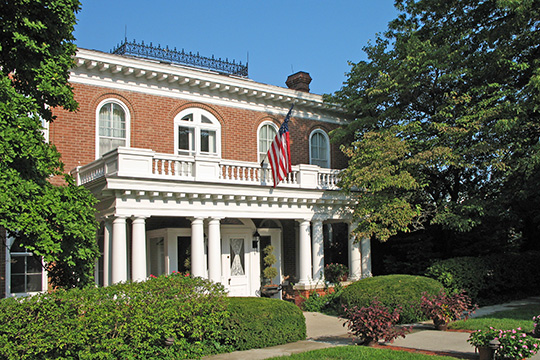 When the site of Maryville was selected for the seat of newly organized Nodaway County in September of 1845, it was named in honor of Mrs. Mary Graham, the first white woman to live within the limits of the town. Her husband, Amos Graham, a politician and lawyer, was the dominant power in the village for many years. In November of 1846, a visitor found Maryville a straggling settlement of six houses, of which Graham was "county clerk, collector, assessor and 'everything but the judge.'" About 1856 Graham formed a law partnership with Albert P. Morehouse. Morehouse established The Nodaway Democrat in 1869. He served as State Representative from 1877-1878 and 1883-1884. Elected Lieutenant Governor in 1884, Morehouse served as Governor of Missouri, 1887-1888, after the death of Governor John S. Marmaduke. Forrest C. Donnell, Republican candidate for Governor of Missouri in 1940, was born near Maryville in 1884. He graduated from Maryville High School, attended the University of Missouri, and after completing his law studies moved to St. Louis to practice law.

The Northwest Missouri State Teachers College, at the northwestern edge of Maryville, was founded in 1905 and became a four-year institution in 1919. On the 72-acre campus are a red brick, 3-1/2 story administration building of modified English Tudor design, a residence hall for women, a training school building, a gymnasium and other buildings. A 248 acre farm provides food stuffs for college use as well as experimental ground for horticulture and agriculture classes.