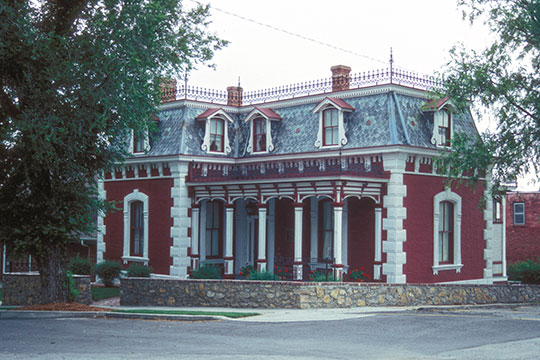 Founded by Zadock (Zed) Martin, Platte was incorporated as a city in 1843.

The first doctor to locate in Platte City [1] was Dr. Fredrick Marshall. Church services of the various and existing denominations were held in homes, log cabins, barns, etc., until late 1842. The first Court House was completed and opened for use in December 1842 and the upper floor was seated by subscriptions and all denominations held services there until building and/or organizing privately.

The first church was Methodist, 1848; followed by the Baptist, in 1850; the Christian, in 1855; and the Catholic, in 1870. The Presbyterian had organized in 1843 and shared the Methodist Church Building for services.

Colonel Morgan's Union Squad burned Platte City in December 1861. Buildings destroyed included the Court House; which was relocated and rebuilt in 1867 in the location it occupies today.

The first public school building was erected in Platte City in 1868. The first telephone was connected in 1883—a connection with Weston. The local exchange was first established in 1897; the first electric lights were installed in 1909; and the waterworks and sewage systems in the early 1930's.

The first daily mail service was established in 1870 and statistics indicate that news from Washington D.C. was available within seven or eight days, compared with twenty days in 1843.