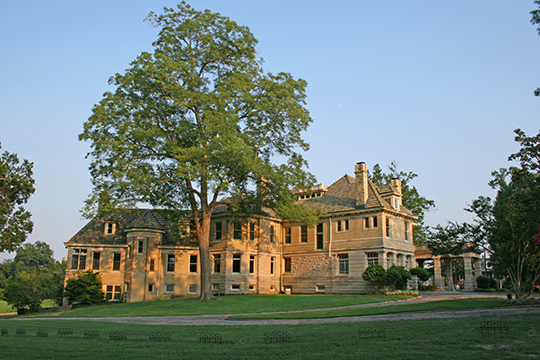 Durham began as Durhamville Station, a four-acre plot that Dr. Bartlett Snipes Durham sold to the North Carolina Railroad Company in 1852 for a depot along their Goldsboro to Charlotte line then under construction. The following year a post office opened here and in 1854, when the railroad line was completed, the immediate vicinity of the depot started to develop as a market center. By the late 1850s, Durham's collection of simple frame buildings included a two-story tobacco factory, but further development was soon stymied by the Civil War. The community first gained prominence in 1865 when homeward-bound Confederate and Union troops who had pilfered John R. Green's factory warehouse flooded the tobacconist with mail orders for more of his product. Additional factories sprang up near the railroad tracks in central Durham, and by the following decade the town had become the country's foremost tobacco manufacturing center, led by W.T. Blackwell and Company, under the direction of Julian S. Carr, and W. Duke Sons and Company, managed by Washington Duke and his sons, Benjamin Newton Duke and James Buchanan Duke. Between 1870 and 1880, Durham's population grew from 200 to 2,000.

The city's industrial base began to diversify in the 1880s when businessmen seeking investments for their tobacco profits entered the textile manufacturing business. Carr led the way with the establishment in 1884 of the Durham Cotton Manufacturing Company in East Durham, followed by the Dukes' 1892 founding of Erwin Cotton Mills, Durham Hosiery Mills, and Golden Belt Manufacturing Company. In the meantime, James B. Duke had formed The American Tobacco Company which absorbed all competitors in a monopolistic trust. At the south edge of Durham, the black settlement of Hayti had become a thriving community in its own right, led by John Merrick and Aaron M. Moore, founders of the North Carolina Mutual Insurance Company.

Although no antebellum structures survive in central Durham, a few dwellings built between the turn of the nineteenth century and the 1850s are located in Durham's outlying areas annexed since 1950. In contrast, many notable buildings associated with the city's late nineteenth-century industrial boom remain. W.T. Blackwell & Co.'s 1874 Bull Durham factory, one of the earliest brick tobacco warehouses dating from the 1870s, and approximately one dozen of the enormous elaborately decorated brick storage warehouses and processing buildings constructed by The American Tobacco Company trust are among Durham's numerous early tobacco buildings that survive intact. The conditions of the remaining textile mills and their villages vary: some of the mills and major portions of their villages are little altered, while other complexes have been drastically changed by deterioration or the loss of all or most of their factories and/or houses. In addition to the mill villages, surviving late 19th-century residential development includes the remnants of the earliest neighborhoods just east and west of the Central Business District, and scattered houses beyond that pre-date the neighborhoods now surrounding them.

20th-century growth and prosperity are represented by an impressive collection of commercial and institutional buildings in the Central Business District and by more than a dozen streetcar and automobile suburbs whose houses range from small and plain dwellings built for laborer rental to fashionable late Queen Anne and period revival style houses, bungalows and period houses. Many of the architecturally distinctive churches built by Durham's early congregations are notably intact, including two from the late 19th-century and several from the early twentieth.