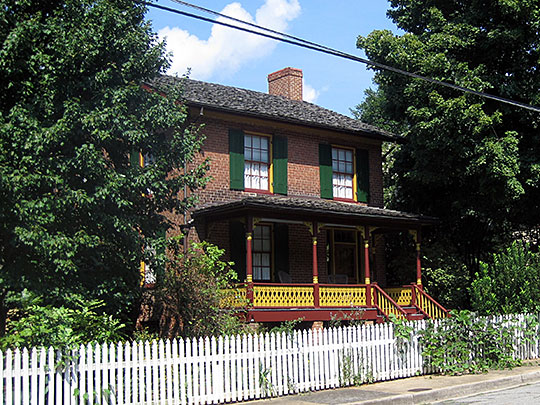 Town of Salem — the site for Salem was selected, laid out, and early government worked-out ca. 1763-1765. A diary from Bethbara notes: "January 6th, Monday (1766), a dozen Brethren, partly from Bethania, partly from Bethabara, took a wagon and went to the new town site where in the afternoon they cut down the trees on the place where the first house was to stand, singing several stanzas as they worked. Trees were then felled for the house which should, when completed, shelter the builders and other workmen. Certain Brethren and boys finished clearing the road opened last year."

Town of Winston — On January 1, 1849, by legislative enactment, the County of Stokes was divided and a new county formed and named in honor of Col. Benjamin Forsyth. Forsyth was a native of Stokes County who had died in the War of 1812. The legislature appointed five Forsyth County Commissioners. The creation of this new county meant that a new county seat would have to be established.

This tract of land was some of the best property in the Salem area, and provided a choice site for the new court house on top of a hill, at an elevation about 180 feet above Salem Creek at the end of Main Street. It is obvious that this transaction was more of a gift on the part of the Moravians, rather than a sale for profit. There was no suitable site for the Court House in Salem, nor did the Moravians want the county seat in their town. Court days were notorious for drinking and rowdiness things the Moravians did not want in their town; and of course, lawyers and court hangers on. However, they did see the advantage of having the county seat of government nearby, and no doubt this influenced their action in making the site available for the new county court house.

The new court house was so near completion that on December 16, 1850, it was formally opened with religious ceremonies. It was a two-story building, forty-four by sixty feet, facing south. The roof of the portico was supported by four pillars, each thirty feet high. The court-room was on the second floor.

The naming of the county town was the next step, and an attempt was made to have this done by a popular vote. The plan was to hold an election and take the name which had the largest number of votes. This plan failed, and January 15, 1851, the legislature passed an act which declared that "hereafter the county town of Forsyth County shall be styled and known by the name of Winston." The name was given in honor of Major Joseph Winston, a prominent North Carolinian, who figured in the War of the Revolution, and was also active in the political development, both state and national. Major Winston was born June 17, 1766, in Virginia, and died in Germantown, North Carolina, April 21, 1815. He is buried at the Guilford Courthouse National Military Park in Greensboro in which he had participated.

Winston-Salem — The towns of Salem and Winston merged in 1913. Not everyone was in favor of consolidating the two towns. Circulars in Salem were passed around saying the community's old Moravian traditions would be abandoned and that Winstonites "would contaminate the moral welfare of the people to the point of wreckage." Other circulars said that historical Salem and industrial Winston were so different that the resultant discord will prove to be very harmful. Another circular said, "There is a possibility of too heavy a tax demand to bring the two communities to an equal status for both." At one point, the campaign got so heated that a report circulated in Salem that the new city had plans to "dig up" Salem Cemetery after the consolidation. Feb 1, 1913 — At a special meeting, Mayor Dalton stated that the purpose was to call an election to vote on the consolidating as one municipality the City of Winston and the Town of Salem, in the name of the "City of Winston-Salem" as provided by an Act of the General Assembly on January 27.