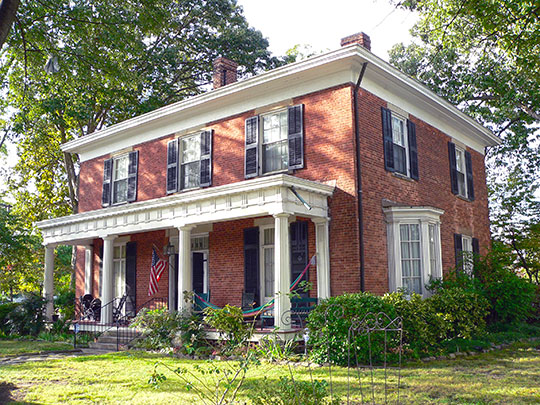 Created in 1771 from Johnston, Cumberland, and Orange counties, Wake County lies in central North Carolina along the border of the Piedmont and Coastal Plain regions. It is drained by the Neuse and Little rivers and numerous creeks. Consisting of 867 square miles, Wake is seventh in size and second in population among North Carolina's one hundred counties. Farmers have found its three major soil types well adapted to cotton, tobacco, corn, sweet potatoes, and other important food and cash crops. Much of the southeastern and extreme southern portion of the county is within the Coastal Plain, having finer sandy soils formed by sedimentary deposits. The eastern and central sections are in the rich Piedmont Plateau, with soils being formed by the weathering of underlying rock formations. The county's western section lies in the Triassic basin, consisting mainly of red and gray sandstones and shales. There are numerous rock outcroppings in the latter two areas which have hindered or even prevented crop cultivation in some cases.

The county was inhabited thousands of years before the early eighteenth century by Indians who traveled, hunted, fished, farmed, and raised families along rivers and creeks. Few cultural remains of these longtime residents have survived over the last two and a half centuries, except some tools, weapons, pottery, and a trail-blazing tree in north-central Wake believed to have been used to point travelers toward a Neuse River crossing. English yeoman and planter families, a few Scotch-Irish, and African slaves began settling in what is now Wake County in the 1730s. Because of the county's geographic position and much politicking by local residents, state leaders decided to locate North Carolina's capital there in 1792. Raleigh, though the seat of state and county government, remained a sleepy southern town until the 1920s, and the surrounding countryside remained primarily rural and agriculturally based until after World War II.

The county's socio-economic development before World War II can be divided into four periods. The first, lasting from the eighteenth century to about the time of the Civil War, was characterized by slow population growth and predominantly subsistence farming, with some limited expansion in commercial productions of cotton and tobacco spurred by railroad construction in the 1840s and 1850s. The second phase, a transitional period that began after the war and lasted into the 1880s, involved a sudden shift to cotton production throughout the county at a time when world cotton prices were steadily declining, eventually causing widespread indebtedness and farm tenancy. The third phase, from the 1880s to the time of World War I, was marked by rural growth and prosperity as more railroads were built and an increasing number of farmers turned to more lucrative crops, chiefly bright leaf tobacco. The fourth phase, beginning with the boom years immediately after World War I and ending with recovery from a postwar agricultural depression in the 1920s and the Great Depression of the 1930s, brought a movement away from farming altogether for a growing segment of the population.