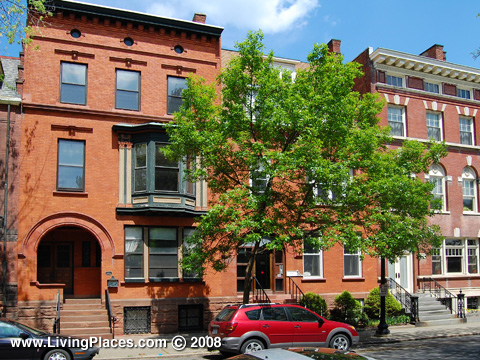 Albany, or Beverwyck, is one of the oldest of the permanent European settlements made in the United States. As early as 1610 the Dutch navigators came up the Hudson, or as the Indians had christened it, the Sha-te-muc, and built trading houses to traffic for furs with the various Indian tribes. In 1614 Albany was founded by a Hollander who erected a stockade fort on an adjacent island and carried on a thriving fur trade for about three years, when a freshet of unparalleled violence carried off all the buildings. It was in 1614 Fort Willemstadt was built upon a hill, at the head of State street near the site of the old Capitol, and which later gave place to Fort Frederick. A new fort was built in 1623, on Market street, now Broadway, below State street, and was called Fort Orange, in honor of the Stadtholder of Holland. As an inducement to settle the country, the Dutch West India Company offered to grant lands to any who should fairly purchase them of the Indians and form a permanent settlement. The medium of commerce was at the time seawant, better known as wampum, which was simply a number of string shell beads. If black, these beads counted three to a stuiver (2 cents); if inside white, six. Kilian Van Rensselaer, the founder of the family, a rich pearl merchant of Amsterdam, availed himself of this offer in 1631, and was granted a tract of land on the west bank of the river, including Fort Orange. Some years later he purchased from the Indians, for a mere trifle, an immense tract of land extending 24 miles along the Hudson, and 48 miles from east to west, on the east side of the river. This was called Colonie Rensselaerwyck of which Van Rensselaer was patroon. For a time the village was called Beverwyck, but in 1664, when New Netherlands came into possession of James, Duke of York, Nieuw Amsterdam became New York and Beverwyck was known as Albany. The Indians called Albany Pempotawnthut. In 1683 Albany county comprised all the territory north of Dutchess and Ulster counties, on both sides of the river, and Albany was looked upon as the fount of authority in church and judicial matters. It was incorporated in 1686 under the Dongar charter, its boundaries being 1 mile wide on the river and 3 1/2 miles long, all the rest belonging to the Colonie Rensselaerwyck. The Van Rensselaer mansion, now standing on Broadway, was built in 1765. The Staat House, so called, corner of South Pear and State streets, is the oldest in the city. Aaron Burr commenced practicing law here in 1782, and boarded in 1824 in a house on the site of the Fort Orange Club. The first steamboat landed here in 1807, and the first Erie Canal boat was locked into the Albany basin October 1825. The Museum building was opened as a place of amusement in 1831. The first locomotive ran into Greenbush from Boston in 1841. A theatre was erected on the site of the Leland Opera House in 1824, turned into a church in 1839, reopened as the Trimble Opera House in 1863. Thirteen newspapers are printed in the city. The Albany Dutch Church, founded in 1640, was the only one north of Esopus until after 1700, that had an established ministry, save the church at Schenectady. The "Shakers," a settlement of about 500 persons, is situated about 7 1/2 miles north of City Hall, approached via the Shaker road. On the western line of the city limits are found "sand lots," valuable for moulding purposes, and, it is said, for the manufacture of glass. The cattle market at West Albany ranks third in the country, over 140 loads, on an average, arriving daily. Of the different parks in the city there is but one (Washington) worthy of that name. Washington Park, approached most easily via Hudson avenue, contains over 76 acres, has over 3 miles of drives and 6 of walks, has a lake 1500 feet long, which covers 5 acres. The cost has been over $1,000,000. To attempt to trace the entire history of Albany up to the present time would be impossible in the small space allotted in this sketch. What has been given is merely an outline of some of the principal facts. It has a history of which every Albanian may well be proud, showing so conclusively, as it does, the industry and thrift of their ancestors necessary to change the once wilderness into the flourishing, populous city of today.