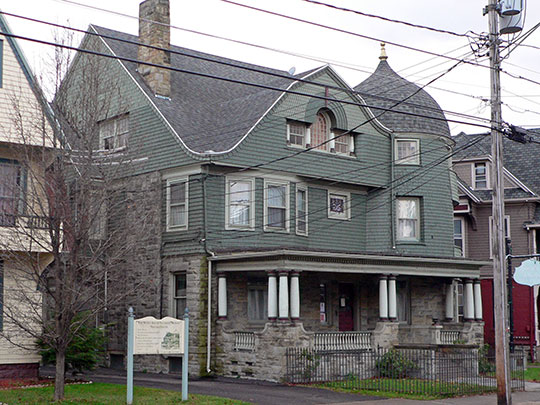 There was no Binghamton until there had been Bingham, the pioneer landowner. But before his day the Indians had followed, by canoe and trail, the two beautiful rivers of which the junction point is the heart of modern Binghamton. Even then the valleys of the Susquehanna and Chenango were highways, and a small Tuscarora village was at The Point.

After the revolutionary war, the Oneidas and Tuscaroras (in 1785) released to the State of New York the site of the present city; and the next year the State issued a patent to William Bingham, James Wilson and Robert L. Hooper, containing upwards of 30,000 acres lying on both sides of the Susquehanna, from Union to Kirkwood. Four years later, the owners divided their property, the eastern portion going to Bingham.

William Bingham had been a successful merchant in Philadelphia and was now a great landed proprietor. He engaged Joshua Whitney as his agent, or factor. It was in 1800, when he was twenty-seven years old, that Whitney took charge of the patent.

A settlement had already begun on the west bank of the Chenango, at the foot of Mt. Prospect. But Whitney, says William F. Seward, "accomplished what kings and conquerors have sometimes failed to do — he changed the seat of government, he persuaded a free and sovereign citizenship to move from 'up the river' to Chenango Point. So easy was it to found a city! Or in other words he induced the first settlers (and perhaps some of them were squatters!) to move their homes, their altars and their fires from outside to inside the boundaries of the Bingham Patent."

As Mr. Seward tells the story, Whitney "had learned the exact location of a bridge to be built across the Chenango and dropped into Keeler's tavern to tell the news. 'Boys,' he said, 'you had better stop building here, the village will be built down where the bridge is built/ and the 'boys' then and there agreed to have a 'chopping bee' the next day and make a clearing for the coming of the bridge. The next morning Joshua Whitney, Selah Squires and four other men took their axes and floated down stream in a canoe, landing at an elm tree on the east side of the river."

The site of the town was surveyed at the junction of the two rivers, on the line of the great Western road, then being opened. Court and Water Streets were the first to be opened; the bridge was built where Joshua Whitney had said it would be; and three-quarter acre lots, as first laid out, were sold at $20, and corner lots at something more. In 1802 the first Court House was established, on Court Street, about opposite the present structure; this event determining the triumph of the settlement at Chenango Point over that up the river.

But even "Chenang Pint," as the settlement, which was first known as Twin Elms, was now called, was not a very important or impressive community. It was really little more than a clearing — a settlement in the forest — with less than 200 inhabitants in 1810, and with their "faith and hope the main asset" of the town. That is a thing to note. For that early faith and hope resulted in a town plan. In 1808 Roswell Marshall had made the survey of the village, platting carefully laid out streets on paper. The only real streets were Water and Court, between the Court House and the Chenango River, and south of Court Street. But he called it the Village of Binghamton and the town as we know it to-day had commenced.

After that, progress followed the normal course. Indian trails were widened into rough wagon roads. The stage coach came, attaining, before its decline, to the glory of four horses. Then came the canal and at last the railroads. The town kept growing and growing; but we do not hear of any comprehensive planning for it after a general survey which was made in 1835 by William Wentz. Through all the years, here a street and there a street have been added, as occasion has arisen; but there has been no attempt to remodel the village and adapt it to the larger future that was becoming assured — no pause to take stock and consider what changes Binghamton needed to adjust it to new conditions such as its founders had never dreamed of, and to fit it for new victories, and for a higher, larger service to its residents and even to the world than had been in the vision of the pioneers. That privilege has been reserved to crown the faith and hope of the present generation, a hundred years later. In looking into the future, citizens of to-day may be likened to a second race of far seeing pioneers.

Binghamton began at the confluence of the Susquehanna and Chenango rivers, and the neck of land between these rivers is still the heart of the city — its business center. Across the Susquehanna, up and down the river, and up the valley of the Chenango have spread the residences. Rolling hills from five to eight hundred feet high are behind them. Thus is Binghamton a valley city, hill encircled.

The Chenango, flowing from the north, fairly bisects the major portion of the town, for the hills come so close to the south side of the Susquehanna that as yet few streets have been laid out on that side. To the north of the Susquehanna the hills stand back from the river, leaving a valley a mile and a quarter in breadth for a distance of four miles west of the Chenango. East of the Chenango, the valley narrows quickly, so that at a distance of two miles there is space only for the river, the railroads and the two highways. On one of the hills that close the valley at this end