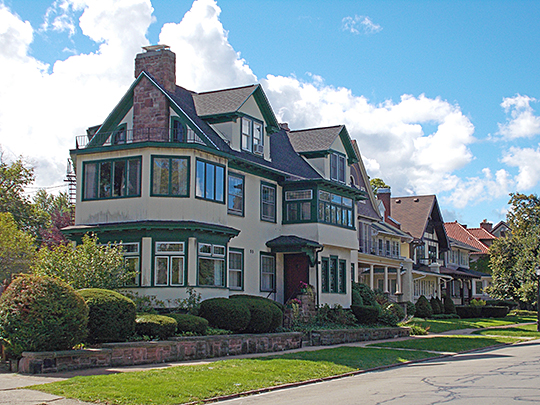 Few cities of the United States have a history more picturesque than Buffalo, or more typical of the forces that have made the Republic great. At the time of the adoption of the Federal constitution, in 1787, not a single white settler dwelt on the site of what is now the Queen of the Lakes; and it was not until after the second presidency of Washington, that Joseph Ellicott, the founder of Buffalo, laid out the plan of the town, which he called New Amsterdam. Ellicott was a man of great ability, force and foresight, and with prophetic vision he saw the future importance of the city, which is now the fourth commercial entrepot of the world. He had been the assistant of his brother, Andrew Ellicott, the first Surveyor General of the United States; and the two brothers, together with General Washington — himself and the two brothers, together with General Washington — himself an engineer by profession — had collaborated with Captain Pierre Charles L'Enfant the plan of the National Capital. With the beautiful design of Washington City fresh in his mind, Joseph Ellicott gave to the village of New Amsterdam a similar system of radiating broad avenues, embracing in the territory they enclosed rectangular systems of streets. The avenues were 99 feet in width and the streets 66 feet. The surveys were begun in 1798 and completed in 1805. Indirectly, therefore, Buffalo is indebted to President Washington for some of its topographical features.

The early history of the village is not unlike that of most of our inland cities which have grown from conditions common to the Canadian and to the western frontier; and differs, perhaps, chiefly in this regard, that owing to the natural advantages of the town's situation and its proximity to the great cataract of Niagara Falls, its annals are rich with instances of exploration, of war and of romance; for adventure and enterprise met here at the beginning of the century.

The period when the Mohawks, the Eries, the Hurons, the Tuscaroras, the Neuters (so called because they were a peaceful tribe) and the Senecas were the sole possessors of this region was succeeded by the epoch of the French traders, whose business was in turn absorbed by their Dutch competitors. These gave way to the alert descendants of New England, who yielded back again the supremacy to a group of Dutch capitalists, composing the Holland Land Company, whose first agent was Joseph Ellicott.

The primitive scenery of Buffalo must have been almost incomparable in its beauty. The wooded hills, the fertile plains, the superb river and the mighty lake enchanted alike the savage and the civilized beholder. Even now, when commerce has invaded the loveliness of the prospect by investing one of the greatest harbors in the world with a fortress of elevators and crowding it with a forest of masts, artists and tourists unite in saying that the Buffalo sunsets are not rivaled anywhere save by those on the Bay of Naples.

In 1806, the first schoolhouse was built on the corner of Swan and Pearl streets — the humble pioneer of an educational system that now embraces sixty modern grammar schools, three collegiate High Schools, and innumerable independent and private institutions of learning. Notable among these latter is the Le Couteulx Asylum for the instruction of the deaf and dumb. This beneficent institution owes its origin to the liberality of the Le Couteulx family. Louis Stephen Le Couteulx de Caumont, a Norman-French gentleman of station and culture, was the founder of the family in Buffalo. He came to New Amsterdam in 1804.

On February 10, 1810, the "Town of Buffaloe" was created by an act of the legislature. This was the name originally given to the settlement by the Senecas, and there is little doubt that it was derived from the visits of the bison to the neighboring salt-licks. However that may be, the village of New Amsterdam was merged in 1810 into the town of Buffalo.

With the disappearance of the Dutch appellation of the town, vanished also the Dutch nomenclature of the streets. Van Staphorst and Willink Avenues were connected and called Main Street; Stadinzky Avenue, a name suggestive of the Polish element that later was to swell in such numbers the population of the city became Church Street; Niagara Street succeeded Schimmelpennick Avenue; and Vollenhoven Avenue was changed into Erie Street.