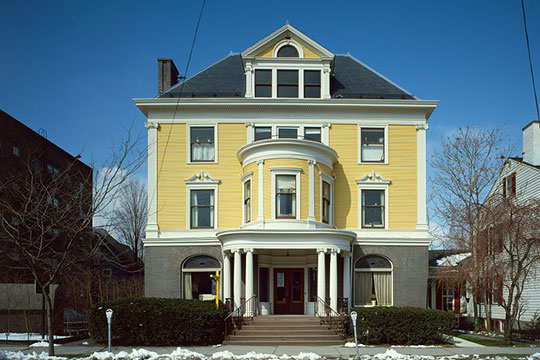 The city of Ithaca is situated amidst a large agricultural region in south-central New York State. The city's terrain is distinguished by a narrow valley, "The Flats," surrounded by steep hills on the west, south, and east, and by Cayuga Lake to the north. The city is cut by three major cracks that cascade down that cascade down these hillsides and empty into Cayuga Lake, The original settlement of Ithaca occurred in The Flats. Expansion up the surrounding hillsides did not take place to any great extent until after the mid-nineteenth century. Cornell University is situated atop East Hill and is surrounded by compact residential neighborhoods. The Cornell Heights Historic District is located just north of the main campus. Ithaca's West Hill is also residential in character but more sparsely developed. South Hill is taken up by large manufacturing concerns and the campus of Ithaca Collage as well as some residential streets.

Although pioneering settlements were noted in and around Ithaca by 1797, the Impetus for a permanent community here came after the New York State Legislature awarded the Revolutionary War Military Tracts. Simeon DeWitt, the Surveyor General of New York State, acquired several tracts in the delta area at the head of Cayuga Lake and in 1806 platted a series of streets in a north-south gridiron pattern on the dry, flat land between Cascadilla and Six Mile Creeks, an area that today encompasses in part the central business district of the city of Ithaca.

The tiny hamlet was incorporated as a village in 1821 and by the 1830's it had become a bustling, growing mill town and transportation center for Tompkins County. Fledgling factories and manufacturing works along Fall Creek and Cascadilla Creek flourished with the completion of the Bath-Jericho Turnpike (an extension of the Catskill Turnpike) through Ithaca as early as 1804 and the Owego Turnpike in 1811. By 1924, seven turnpikes served Ithaca. The hydropower provided by Cascadilla Creek and Fall Creek became the focus for the community's industrial development. The large waterfall at the base of Fall Creek, in particular, proved an attractive spot to nineteenth-century entrepreneurs. The falls were developed for hydropower as early as 1813 and small-scale manufacturing flourished through the late-nineteenth century. Grist, flour, saw, paper, and cotton mills were first established. After the Civil War came such manufacturing operations as Ithaca Glass Works, Ithaca Organ and Piano, the Ithaca Agricultural Works, and the Calendar Clock Works. These companies reached their peak in the last years of the nineteenth century and none survived after the first World War. They were, however, superseded by other large-scale companies with national markets after the turn of the century.

The most important event in the history of the city of Ithaca was the opening of a Morrill land grant college here in 1868. Cornell University received a charter in 1865 and was named after Ezra Cornell who, wishing to ensure that an adequate campus be provided for the new university, presented a gift of two hundred acres of farm land on East Hill to the board of trustees. On October 7, 1868 Cornell University formally opened and admitted the first class of 412 students. It was to grow over the next four decades to become the nation's second largest university; Columbia University led Cornell by only sixty bodies in the academic year 1909-1910.

Ithaca was incorporated as a city in 1888 and over the next two decades many changes occurred which were to transform this small industrial village and college town into a twentieth-century urban community. The city received one of the earliest telephone systems in the country and, with the development of the electric dynamo by two Cornell University professors, the city experienced the wonders of outdoor electrification long before many other larger communities. Streets were paved and sewage and water systems improved in these years and trolley lines were extended up East Hill to the University by the early 1890's. Service had begun in 1884. A strong local economy of maturing new large-scale industries (e.g. Ithaca Gun and International Salt Co.) and the steady growth of Cornell University in the 1890's, with the opening of the Veterinary College and the professional Schools of Law and Medicine, as well as the expansion of Sibley College of Mechanical and Electrical engineering, led to a sustained building boom in Ithaca through the turn of the century.

Most of this new building took place on East Hill (East Hill Historic District, N.R.: 1986) where the demand for student and faculty housing had become acute. But housing construction did not keep pace with university needs. It was not until after the turn of the century, in fact, that the city was to burst completely the bounds of the old village settlement along the flats. This followed a major expansion program at Cornell University beginning in 1902 with the establishment there of the New York State College of Agriculture. The introduction of additional new industries with national markets, in particular, Morse Chain Company and its local subsidiaries, which set up operations in Ithaca after 1906, contributed further to a municipal prosperity and physical expansion that weathered a number of nation-wide financial panics in the early years of the twentieth century.

It was the development of the electric trolley system more than any other factor, however, that led to the ultimate territorial expansion of the city after the turn of the century. Between the time of municipal incorporation in 1888 and World War I, several new planned residential subdivisions were platted both within the city and in the surrounding region (e.g. Miller Tract, Bryant Tract, Cornell Heights, and Cayuga Heights). A number of others were planned but never developed. All were on East Hill and the first to undergo development was Cornell Heights.