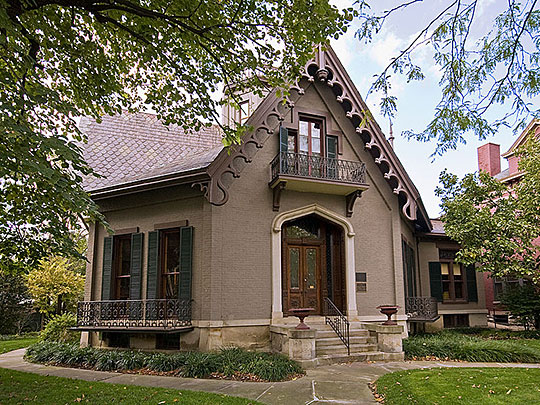 Hamilton, lying in the midst of the far famed and historic garden spot of America — the Miami Valley, surrounded by the best country that the world affords stands second to none. A city which claims for its children, many of the greatest men the American nation has produced. Men who sat in the highest tribunals, men, whose patriotism led them to shed their blood on many a field in the holy cause of liberty. Men whose war cry was "for God and native land," and whose deeds of valor made tyrants tremble on their throne.

From such ancestral stock came the first residents of this city. Is it any wonder that with such example to emulate, that the town of Hamilton has produced such good citizens?

Looking backward, let us examine some of the "footprints on the sands of time" delve into our history and traditions that have gone to mingle with the years beyond the flood.

The route of General St. Clair in his disastrous campaign in 1791 passed through Butler County. In September of that year Fort Hamilton was built. It was a stockade, with bastions and platforms for two cannon. Barracks were constructed with a guard room also, and two store houses for provisions. It is a remarkable fact that the fort was completed in about fourteen days. The cross cut saw, the augur and the axe were pressed into service and Fort Hamilton was a reality, and St. Clair's orders had been obeyed.

Major Rudolph was placed in command. He was a tyrannical officer. His cruel treatment of six deserters has been published so often that we shall not touch upon it. There are no facts substantiating the hanging of John Brown and Seth Blinn.

Fort Hamilton remained occupied as a garrison until the year 1796 when the public stores were sold at auction, and the fort abandoned. After the treaty of Greenville in 1795 many of the officers and soldiers of Wayne's army were disbanded and returned to Hamilton about the first of June, 1795. James McBride in his valuable manuscript history of Hamilton, written in 1831 makes the following reference to the old fort: "Part of the line where the pickets stood can yet be traced, and some of the buildings of the garrison remained standing after 1811."

The ground on which the town of Hamilton is laid out within the tract of land sold by the congress of the United States to John Cleves Symmes in 1787 and afterwards conveyed to him by patent bearing date the 30th day of September 1794. The third entire range of six miles wide within this purchase extending from the Great Miami to the Little Miami was conveyed to General Jonathan Dayton by John Cleves Symmes as appears by a deed bearing the date of October 30, 1794. On July 27, 1795, Johnathan Dayton conveyed the fractional section No. two in township one, range three in said purchase to Israel Ludlow, by whom the town of Hamilton was laid out on said fractional section.

The town of Hamilton being laid out under the government of Northwest Territory there was at that time no law requiring town plats to be placed on record, consequently the plat of Hamilton was not recorded at that time. However, on the 28th of April, 1802, Israel Ludlow placed the town plat on record in the county of Hamilton, at Cincinnati where it may be found in Book E, No. 2, page 57. The most northerly block of lots on the town plat are not laid down from 222 to 242 inclusive, hence the presumption that they were laid out after the plat was placed on record.

As early as 1795, but few settlers were to be found at Hamilton. Among the very earliest pioneers were John Greer, Andrew Christy, Benjamin Davis, David C. Orcutt, Isaac Wiles and Benjamin Randolph.

In the April following in 1793, General Wayne arrived at Hamilton with his main army. He has been represented as an arbitrary despotic man. However, he was much displeased with the conduct of Major Rudolph, and gave him his choice, either to be cashiered, or to resign his command.

A post office was established in Hamilton, August, 1804 and John Reily was appointed postmaster.

In March, 1805, occurred an extraordinary flood in the Miami River, which was ever afterward known as the big flood. The town of Hamilton was almost submerged and great alarm was felt at the rising water.

It may be well here to give a retrospect of the appearance of the town of Hamilton in 1807, which is graphically portrayed by that eminent historian, James McBride. He says: "When I first visited Hamilton in December, 1807, the improvements were principally confined to near the margin of the river. William McClellan, who served eight years as sheriff of the county of Butler, then kept a tavern in the old garrison house, which had been erected for the accommodation of the officers, and which stood on the bank of the river near to where the east end of the bridge is at present (in 1831). John Torrence and William Murray each kept houses of entertainment at the river on Dayton street. A store was kept by John Sutherland in the low ground and Joseph Hough and Thomas Blair had a store near the south-west corner of the public square. John Reily, clerk of the court, kept his office in a small log house in the lower part of the town. Dr. Dan Millikin was the only physician then in Hamilton. He lived in a house on the bank of the river."

The town of Hamilton was incorporated in the year 1810, and police and officers were elected who organized themselves and for four years continued to exercise jurisdiction and adopt measures for the government of the town. Owing to some irregularities however, in the proceedings or carelessness on the part of the officers, the charter became forfeited in 1814, and so remained until 1827, when the town was again incorporated together with Rossville under the style of The Trustees and citizens of Hamilton and Rossville." The two towns remained under this one charter until 1831, when the act was so amended as to separate the two towns, and erect each into a corporation by itself.