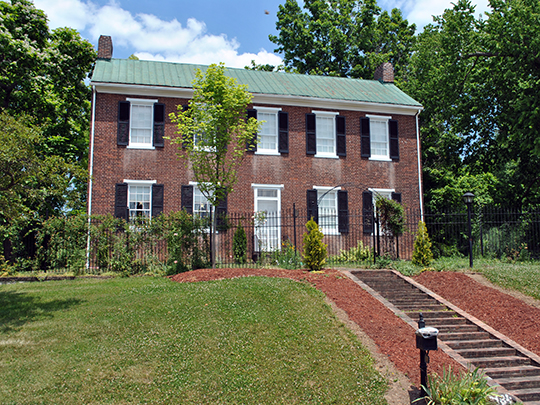 Ebenezer Zane was the original proprietor of the town. He was already the owner of one section of land at the crossing of Hocking. Upon that tract Lancaster now stands. In the fall of 1800, Mr. Zane laid out and sold the first lots. The rates ranged from $5.00 to $50.00 a lot, according to location. A large proportion of the first settlers of Lancaster were mechanics, who erected cabins with little delay, finding the materials mainly on their lots. To encourage emigration, Mr. Zane gave a few lots to such mechanics as would agree to build cabins on them and go to work at their respective trades; and it is said, that the work of organization went on so rapidly, that by the spring of 1801 the streets and alleys in the central part of the town assumed the shape they still retain. "New Lancaster" was the name first given to the place, in compliment to emigrants from Lancaster, PA, who made up a considerable portion of the first settlers. The name however was changed by the Legislature in 1805, to Lancaster, Ohio, to avoid confusion in the postal service. The title, New Lancaster, nevertheless continued to be used for more than twenty years afterwards.