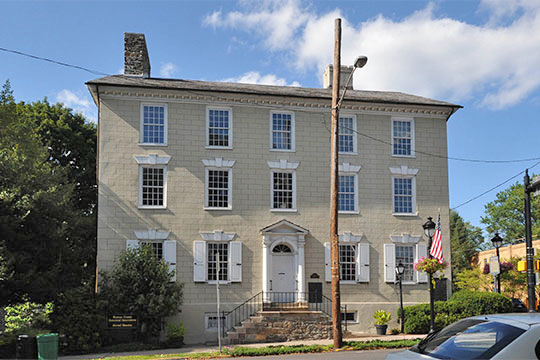 Stroudsburg, county seat; first settled by Jacob Stroud, laid out at right angles, with a liberal plan of broad avenues, and houses set back thirty feet from the sidewalk, resembles a New England village. Courthouse, built, 1890, of rough stone, with high chimneys and belfry, contains portraits of judges; with jail and county house forms group facing the public square. Churches are of all principal denominations. The National Bank and other buildings are chiefly by Lacy&Son, architects. A fine stone and iron bridge, built by the state, over Broadhead Creek, connects the two boroughs of Stroudsburg and East Stroudsburg; it replaced a wooden one, over one hundred years old, carried away by the freshet in 1862. In 1755, Indian crossed over the old bridge, burned Dansbury Mission and other buildings, leaving Stroudsburg without a house or resident. Ephraim Collver, who had a grist mill there, escaped with his family to the Moravians at Bethlehem.

About 1756, a line of forts were erected to protect the frontier settlements; sites are unmarked; Fort Norris at Greensweigo, Eldred Township, on road toward the Minisinks, eighty feet square, was completely stockaded. Fort Hyndshaw, at the mouth of Bushkill Creek, was built for the Revolutionary War. Fort Hamilton was built in 1757, some one hundred feet beyond the Lutheran Church in western part of the town. Fort Penn, center of town, was residence of Jacob Stroud, who died in 1806; here in 1778, he cared for thirty or more persons, fugitives from the Wyoming massacre, who crossed the Pocono plateau with great toil and distress, later proceeding to their former homes in Connecticut. At Locust Ridge in Wyoming Valley, a battle was fought called the Pennamite War, between Connecticut claimants and Pennsylvanians. General Sullivan and his troops, in 1779, laid out a road through this county, from Wind Gap to Stoddartsville, Wilkes-Barre, and on, continuing an expedition from Easton to Genessee Valley, against the Indians; it may still be traced almost the entire way. General Daniel Brodhead and most of his male relatives from Monroe County, were in the Revolutionary War.

Monroe County was a portion of the lands of the Minisinks; there were several Indian villages; the Delaware chief, Tedyuscung, born on the Pocono Mountains, resided here. It is said that the first white settlement in Pennsylvania was at Shawnee, by the Low Dutch or Hollanders, in "Meenesink," many years before William Penn's charter. When Nicholas Scull surveyed the land for the province, Samuel Depui was here; he purchased land in 1727 from the Minsi Indians, now site of Shawnee, an attractive village, five miles east of Stroudsburg; and the same property later from William Allen, 1733, for whom the oldest survey in the county was made.