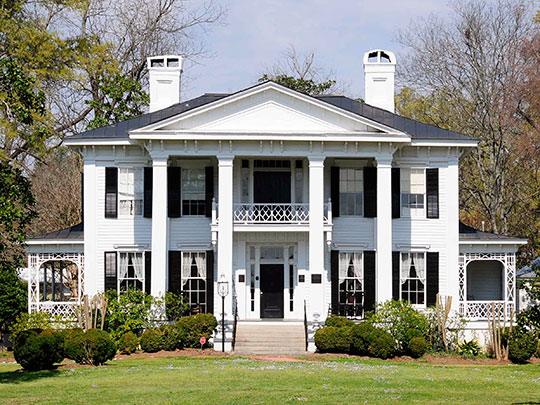 The City was incorporated by the State Legislature on December 20, 1832, with city limits of a one-mile radius from the court house. Abbeville grew and prospered during the 1800's with 1880-1890 being a period of considerable construction of homes and churches.

Perched on many small hills, Abbeville, seat of Abbeville County, centers around a large square from which streets ramble off among ante-bellum houses on wide green lawns. The slender spire of Trinity Church rises high above the business buildings. On the edge of town, particularly westward, are the sections where red roads and asphalt streets thread between small frame houses in the mill village. Named for Abbeville, France, by Huguenot settlers, the town still treasures thick-stemmed grapevines that cling to rotting trellises. They were planted by the French immigrants who ordered expensive vines from home in hope of establishing a wine-making industry. They had some success until a State law declared the business illegal.

Abbeville is often referred to as "The cradle and the grave of the Confederacy," and the claim is often disputed. Here, it is claimed, the meeting that began the secession movement was held November 22, 1860, on what is now called Secession Hill; and the last Confederate cabinet meeting of President Jefferson Davis was held on May 2, 1865, in the Burt Mansion. The two-story white frame structure on the corner of Main and Greenville Streets was built about 1850. Under the pedimented portico is a small balcony. The corners of the building are accented by pilasters, and the solid square chimneys have paneled sides. The house is almost hidden from the street by magnolias, deodars and old shrubbery.

Escorted by a detachment of cavalry and accompanied by his wife and children, Davis was hurrying southward, hoping desperately that he would find a haven in Alabama or beyond the Mississippi River where he could revive the Confederate cause. In his wake followed officers, soldiers, and Richmond employees of the fallen government, some on horseback, others on foot, stampeded to flight by Federal forces converging toward northwestern Georgia, in an attempt to intercept the president. The decisions of the cabinet that late spring afternoon were that Mr. Davis should proceed immediately to Washington, Georgia, where existing conditions would dictate the further route of his retreat; that the wagon train of specie, remnant of the Confederate treasury which had been hauled south under heavy guard, should be equally divided among officers and men, about $25 each; and that brigade commanders should be allowed to furlough or discharge any officer or private instantly upon application. Davis left Abbeville and crossed into Georgia, but with most strategic points in the State already in possession of the enemy, the weary leader was captured on May 10, the second anniversary of Stonewall Jackson's death, which is still observed in most Southern States as Memorial Day. He was charged with treason, spent two years in prison, and was released on bond in 1867.