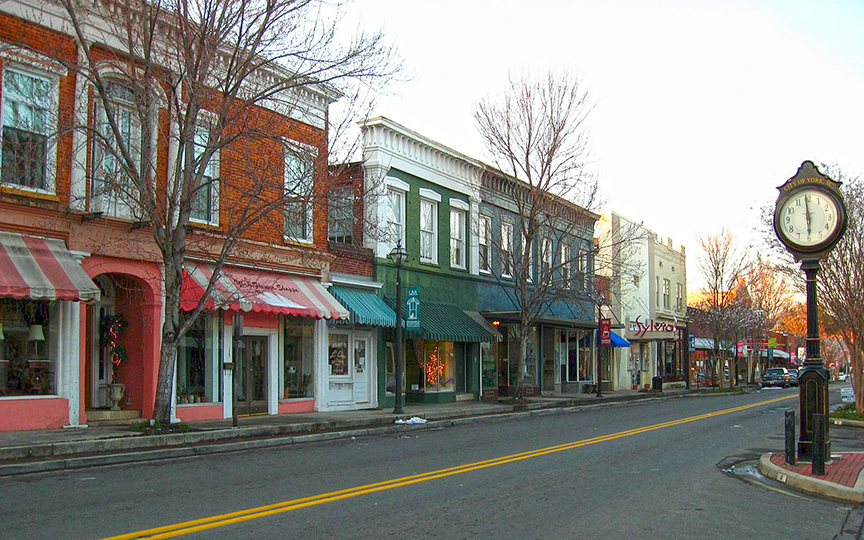 The City of York [†], located in the western part of York County, is a city with a proud history and a promising future. Created in the late eighteenth century as a county seat, the City now finds itself on the fringes of one of the most dynamic urban growth centers in the nation.

The city�s location near the Charlotte‑Rock Hill urban areas and its position equidistant between the I-77 and I-85 corridors presents opportunities for strong growth in the future. York has been an important urban center for York County for well over two centuries.

York is the county seat of York County and enjoys an intimate character of a small friendly community with a strong historic core and a traditional lifestyle offering a desirable alternative to life in the larger metro areas. This relationship of the small city with the asset of a large historic district and strong downtown area but located at the center of a triangle of unprecedented growth in the surrounding cities of Charlotte, Rock HillRock Hill, and Gastonia, presents a unique challenge.

York has been a leader in the recognition of the importance of historic properties in the life of the community. The preservation of significant historic resources has come to be recognized as an important civic function. Historic areas can provide significant economic development potential. Studies by the National Trust for Historic Preservation and the South Carolina Department of Archives and History have shown that historic designation can lead to increased property values for home owners. Historic properties and districts can also provide a unique identity for a community in a time when urbanization and modern development and architectural practices can make one town indistinguishable from the next.

York is fortunate to have a number of cohesive residential neighborhoods. The historic residential neighborhoods surrounding the downtown area provide much of the character that makes York unique. Although many of the historic homes are on major streets, such as East Liberty, North Congress, and Kings Mountain, zoning and historic district regulations have protected these neighborhoods from commercial encroachment. Other distinctive neighborhoods include the mill village area around the former Cannon Mill site, several predominantly African- American neighborhoods in the southern and western sections of the City, and newer subdivision areas that make more modern housing available.

A former hamlet named Fergus Crossroads became Yorkville, the county seat of York County, in 1785. By 1823 York had 80 homes, 8 stores, 5 taverns, 2 academies, a post office and a printing office. It was officially incorporated in 1841. By 1861 the population approached 1,500 and had the second-highest per-capita income in the state. [1]