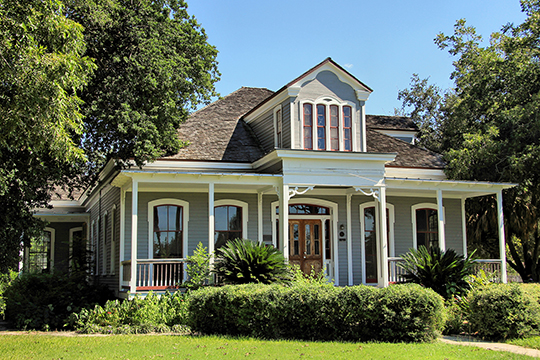 Victoria is one of the state's oldest, most historic cities. In fact it could be argued that Texas history really began in Victoria County. It's unique history began when French nobleman Rene Cavalier, Sieur de LaSalle established the short-lived Fort St. Louis, which was abandoned in 1690. The town was established in 1824 when the Republic of Mexico approved Don Martin De Leon's request for a large land grant on the lower Guadalupe River. The land grant detailed a capital city, "Nuestra Senora de Guadalupe de Jesus Victoria," shortened by colonists to "Guadalupe Victoria." De Leon's city plan included a one square mile grid designed with 256 blocks and sited in a north-northeast orientation along the eastern bank of the Guadalupe River. The original townsite was laid out in accordance with his knowledge of European and Mexican cities, setting aside land for a central plaza, schools, churches, and trade. It was the only successful land grant in Texas bearing a Spanish surname, and Victoria County was the only place in Texas where all six flags actually flew.

Victoria's initial population was comprised of 41 families granted permission to settle the colony. Each family received one league of land and a town lot. By 1834 about 300 people were living in the municipality, which was governed by the Council of Ten Friends from 1824 to 1828 and by four alcaldes from 1828 to 1836. Guadalupe Victoria contributed volunteers, supplies, and arms to the Texas cause against Santa Anna. Its superior defensive position on the banks of the Guadalupe induced Sam Houston to order James Fannin to retreat there from Goliad in 1836. However, Fannin was defeated at the Battle of Coleto, and the town was occupied by the Mexican army until the Texas victory at San Jacinto. Soon thereafter, the Mexican residents were ostracized; they fled, and their town, resettled by Anglos, became known as Victoria. Victoria was incorporated under the Republic of Texas in 1837.

Victoria continued to grow as a trade center, especially as Indianola became a major seaport for both goods and thousands of immigrants who settled in the area. By 1860 Victoria had 1,986 residents (including 521 slaves), a variety of stores, a weekly newspaper, and a courthouse. The town had become a major junction between Lavaca Bay ports, San Antonio, Austin, and northern Mexico. After the Civil War, a variety of settlers—Americans, Germans, Italians, and Mexicans—had transformed the essential character of the town. This was the beginning of the great cattle ranches and the presence of prominent families such as the Welders and O'Connors.

The San Antonio and Mexican Gulf Railroad reached Victoria in 1861, and the line became part of the Gulf, Western Texas and Pacific Railway in 1871. The New York, Texas and Mexican Railway reached the city during the 1880s. John W. Mackay and Daniel E. Hungerford collaborated with Italian count Joseph Telfener to prove that a line from Rosenberg to Victoria could be a profitable venture. Italian laborers immigrated to Texas and, on July 4, 1882, completed the railroad. In 1888 local businessmen established a mule-drawn streetcar system that operated until 1894. The four cars were named for popular ladies of the city.

County Judge J. L. Dupree sponsored the community's first highway in 1889. It ran about three miles, from the Guadalupe River bridge to Goldman Hill, southwest of Victoria, where the Refugio, Goliad, and Mission Valley traffic merged. In 1917 a $100,000 bond issue inaugurated the era of "hard-top" streets, and Uvalde Rock Asphalt Company received a contract to improve fifty-three blocks of downtown Victoria roadways.

The city's first lighting network consisted of oil lamps attended by A. Musselman, who continued after the advent of electricity to superintend the new "chained lightning." In 1890 the Victoria Light, Power, and Ice Company contracted with the city fathers for forty bulbs of thirty-two candlepower. After 1925 Central Power and Light supplied the city's electrical energy.

The change from river water to wells began with the standpipe, a Victoria landmark constructed in 1884 and located on De Leon Plaza. This 105-foot tower leaned enough to encourage wagers on its destiny. The $89,000 bond issue that financed the standpipe also provided for a pumping station to push untreated river water into the reservoir tower. In 1907-08 an additional bond commitment converted the water system to artesian wells.

Victoria was the birthplace of Longhorn cattle. Ranching was the area's first major enterprise and the one that ensured Victoria's early success. The county had 42,993 beef cattle by 1880 and 75,495 by 1900. One of the first meat-packing plants was established here in 1869, and dipping tanks and silos were introduced. During the 1880s changes occurred that reflected a general transition in the state from pioneer ranching and trail driving to market production. Many ranchers shifted their interests to financial institutions and commerce, which in turn supported a transformation of the cattle industry.

The decade of 1910 to 1920 was a critical time in Victoria's development. During those years the county's population increased 21.9 percent to 18,271, while the city's population rose by 62.2 percent to 5,957. The shift in population from rural to urban was a culmination of events that began during the 1880s, when immigration, devastating hurricanes (which drove Lavaca Bay residents inland), improved transportation facilities, and social amenities attracted a population base for subsequent growth.

During World War II and afterwards Victoria became one of the fastest-growing cities in Texas. The city hosted Aloe Air-Field from 1942 to 1946 and Foster Army Air-Field beginning in 1942. In 1958 Foster Field became the Victoria Regional Airport. Petrochemical industries contributed to an increased prosperity, and the city's population grew from 16,126 in 1950 to 33,047 in 1960 and to 41,439 in 1970. By 1980 it had reached 55,076. Today, the city has a symphony orchestra, a community theater, a fine arts association, a nationally recognized Bach Festival, numerous historic homes, museums, and libraries, superior medical facilities, a branch of the University of Houston that complements Victoria College, and the Texas Zoo, the only zoo in the world that exclusively features native Texas wildlife.