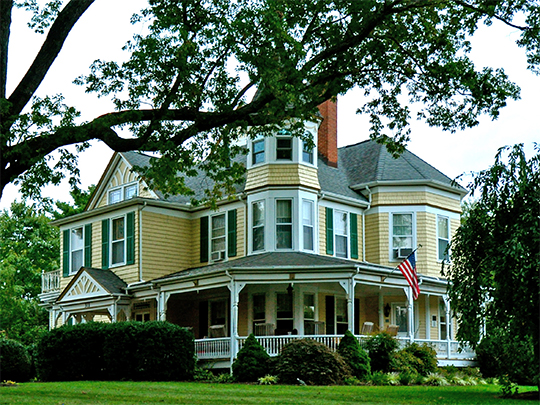 The region of southwestern Virginia in which the Town of Christiansburg is located was inhabited by Shawnee and other Native American tribes when settlers began arriving. The area became known as Hans Meadow in the early 18th Century for a Dutch priest, Friar Hans, who arrived in the area in the late 1600's. In the 1700's, the region was settled by Pennsylvania and eastern Virginia pioneers following discovery of the New River in 1671. There were many Native American encampments in the area, particularly along the New River, and conflicts were common between the Native American tribes and the early settlers.

The Town of "Christiansburgh" was named in honor of Colonel William Christian, an early settler in the region and one of the first justices of Fincastle County and a member of the Virginia Legislature as well as a brother-in-law of Patrick Henry. Theodore Roosevelt, in The Winning of the West, stated that Colonel Christian was a "noted Indian fighter" and a "very gallant and honorable man." Originally a concentration of taverns and rest stops along the Great Wilderness Road (U.S. Route 11 today), the original 1.1-square mile Town was established on November 10, 1792 by an act passed by the Virginia General Assembly and incorporated on January 7, 1833.

Frontiersman Daniel Boone resided in Town for a time. Boone and his axe men made Christiansburg part of the "Wilderness Trail" (now U.S. Route 11), the route carved westward for settlers. Among records in the County Courthouse is a warrant dated 1774 for the arrest of Boone for debt. It is thought that the money owed was borrowed to pay his men and to buy supplies. The warrant was issued under King George's name for the frontiersman's arrest, but marked "Not executed — Gone to Kentucky." The debt was later repaid.

Davy Crockett, legislator and hero, lived in Christiansburg and worked at John Snider's Hattery Shop which was located on W. Main Street. Davy Crockett died at the Alamo on March 6, 1806 buying time for Sam Houston to assemble an army to face Santa Ana in the struggle for Texas independence from Mexico.

Christiansburg experienced significant growth in the early 1800's. In 1835 the population had grown to 335 and there were 45 houses and by 1840 the population was 400. Most residential growth was confined to Main Street and Cross Street (now Franklin Street). Several industrial complexes developed around the Gardner Zink Mill west of Town and the Chrisman Mill along Crab Creek on what is now State Route 661 (Chrisman Mill Road). These two mills were responsible for the centralization of a number of area milling operations in the late 1700's.

New streets were laid out during the early 1800's and a new lot numbering system was introduced. On August 22, 1822, the trustees resolved that "a stone at least three feet long be placed at each corner of the public land belonging to the Town of Christiansburg to be set into the ground two feet." New construction included a number of churches and a public well and pumps, which were placed just north of the Courthouse in 1826. Ten years later a public privy was built near the Public Square. A new courthouse was constructed in March 1836 in the east corner of the Public Square.

Former Town resident Dr. John Floyd was the attending surgeon at the Lewis-McHenry duel in 1808 and later governor of Virginia in 1830 as well as a member of Congress. He also was the father of later governor John Buchanan Floyd. John Buchanan Floyd (1804-1863), governor of Virginia from 1849 to 1852, was born in Christiansburg in 1804. He is buried with his family at Smithfield, adjoining the Virginia Tech campus.

Pennsylvanian artist Lewis Miller was fascinated with Montgomery County's scenery and often stayed in Christiansburg depicting the Town scenes from the 1830's through the 1850's. The Montgomery Museum and Lewis Miller Regional Art Center, located at 300 Pepper Street, SE, is named for him.

An act passed in 1854 established the Olin Preston Institute at Blacksburg to provide instruction in science, literature, the arts, and foreign languages. This school was the forerunner of the Virginia Agriculture and Mechanics College (1872), which later became the Virginia Polytechnic and State University (Virginia Tech).