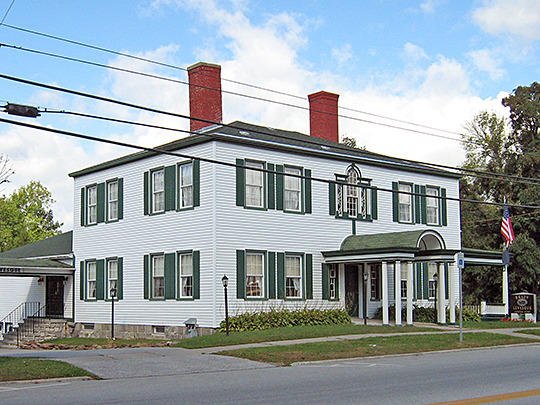 St. Albans, the shire town of Franklin County, is rightly known as The Railroad City. Containing the office headquarters, yards, and shops of the Central Vermont Railway (now a subsidiary of the Canadian National), it owes much of its vigorous growth to its excellent transportation facilities and its steady prosperity to the employment of large numbers of its residents by the railroad.

Yet St. Albans is largely free from the clamor, smoke, and smudge that more often than not detract from the physical appearance of railroad centers. This fact is partly due to the discreet location of the railroad yards and shops somewhat below and apart from the main business and residential sections, and partly to the almost inviolable beauty of the natural setting. The city stands on the gentle slope of an amphitheater formed by Green Mountain foothills. Its floor stretches over wide meadows to island-dotted Lake Champlain, behind which bulks the immutable purple of the northern Adirondacks. From the high eastern residential districts, or from near-by hills, St. Alban seems to rest submerged beneath a gree sea of elms, from which rise only the slender spires of churches, like constant periscopes. This view caused Henry Ward Beecher to write that St. Albans was 'a place in the midst of a greater variety of scenic beauty than any other I can remember in America.'

In 1664, the territory that includes St. Albans was part of a French seigniory known as La Doubille, so remaining until the accession of British rule in 1763. It was then included in one of the New Hampshire grants. Eleven years later, the first settler, Jesse Welden, a half-breed Indian, came pioneering from Connecticut. He made an extensive clearing on Ball Island, in what is now St. Albans Bay, but disappeared during the Revolution, not to return until 1785. By this time the St. Francis Indians were friendly, and Welden ventured to clear and cultivate a tract of seventy acres near the center of the site of the present city. He was soon joined by other settlers, largely from the lower Connecticut Valley region of present Vermont, and in 1788 a town was formally organized. Among the early settlers was Levi Allen (brother of the famous Ethan Allen), who laid claims, later invalidated, to so great a part of the town that he addressed his wife, in a letter, as 'Duchess of St. Albans.'

The establishment of direct connection by rail with the outside world through the Central Vermont Railway was the turning-point in the industrial history of St. Albans, which had almost no importance as a shipping point during the heyday of water commerce on Lake Champlain. Construction of the road was begun in 1848 at Essex Junction, but was suspended when about half completed because of lack of funds. President Smith and others seeking to incorporate borrowed the needed money on their personal credit and saved the project from failure. The first train entered St. Albans on October 18, 1850, a diminutive wood-burning locomotive named 'Abigail Adams' having pulled it all the way from Montpelier.