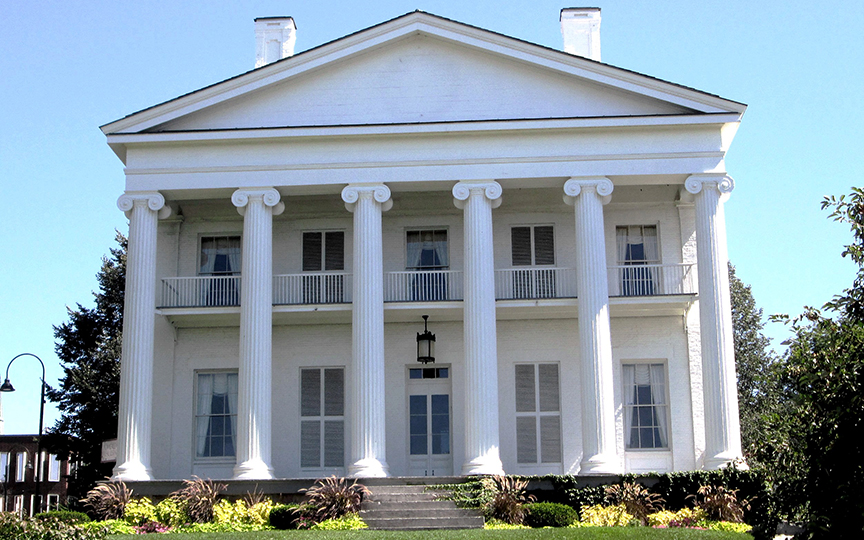 Photo: Follett House, 53 College Street, Burlington, VT, ca. 1840; The Follett House was built by Timothy Follett, prosperous Burlington developer and former county judge. Follett later became the president of the Rutland Railroad. He lost the house, along with his personal fortune, when the railroad went bankrupt in the early 1850s. The house was bought by Henry R. Campbell, superintendent of the rival Central Vermont Railroad in 1853. The house was listed on the National Register of Historic Places in 1972. Photographed by user:MFWills, 2009, (own work) [cc-by-3.0], via Wikimedia Commons, accessed September, 2012.

The area now known as the State of Vermont [†] was the subject of a hot dispute in the mid 1700s between New Hampshire and New York, which both claimed this region. In January 1777 delegates of the area met at a convention in Westminster, and declared the independence of the new state of "New Connecticut." They petitioned the Continental Congress in April for admission to the Union. Congress denied the state's admission, largely at the insistence of New York, which guarded its jurisdiction in the area. In July a group of delegates met in Windsor (at what is now called the Constitution House, listed on the National Register on March 11, 1971) to draw up a constitution for the "Free and Independent State of Vermont." The constitution, adopted on July 8, 1777, was a liberal document for its day, partly modeled on the Pennsylvania constitution. It differed by including a series of such original, radical provisions as universal manhood suffrage, the prohibition of slavery, and a system of public schools. The constitution also provided for the annual election of a governor, lieutenant governor, treasurer, and Governor's Council (12 members).

Vermont's General Assembly met for the first time in March 1778. Thomas Chittenden was chosen as Vermont's first governor. During the fourteen years of the republic, Vermont issued its own currency, raised its own troops, ran its own postal service, and carried on diplomatic relations. In addition, common and secondary schools were established, the University of Vermont was founded, and the state judiciary was enlarged to provide for a county court system. Finally, on March 4, 1791, after a series of attempts to gain admission to the Union, Vermont was admitted by Congress to the Union. It became the fourteenth state — the first state to join the original thirteen colonies. Political partisanship began developing in the late 1700s, paralleling the party system that was emerging at the national level. The power of the executive branch diminished and the legislature began to assume its larger, constitutional role in state governance. The legislature, which was made up of one representative from each town, met annually. Prior to the establishment of a state capital, the legislature moved about each year, meeting in fifteen different towns between the years 1787 and 1808. Montpelier was finally chosen as the state capital in 1805 and a three-story wood frame state house was constructed. It was replaced in 1833 by a significantly grander structure built of Barre granite and designed by Ammi B. Young. In 1857 this state house burned and was replaced by the present structure, designed by Thomas Silloway. Early state institutions included the State Prison, built in Windsor in 1809 on the site of the present state prison. Funds for the building and lands were provided by the General Assembly. The first state banks were chartered in 1806 in the towns of Middlebury and Woodstock. A system of bank regulation was established in the 1830s.

In 1782 the county court system, the county's primary government function, was established. County seats became centers of considerable activity, with the courthouse and jail typically sited in a prominent location in the center of town. During the late 18th and early 19th centuries it was left up to the shire town (county seat) to provide its own courthouse. Before a courthouse was constructed, judicial hearings took place in whatever space was available, such as meetinghouses, homes, and taverns. Court buildings were being constructed by the 1780s and perhaps earlier. They looked somewhat similar to churches, but with belfries rather than steeples. Court houses, usually located prominently in the centers of the shire towns and facing greens, were built in Vermont throughout the 19th and into the 20th centuries in the popular architectural styles of the time. The town was the principal seat of government throughout much of the 19th century. The constitution of 1777 delegated most responsibilities to the local level, and for the next century and more. Town Meeting Day had more effect on the day to day lives of Vermonters than the convening of the state legislature. On the first Tuesday of every March, the citizens of each town voted on virtually all issues pertinent to its livelihood, ranging from care of the poor, to education, building schools and town halls, new roads, and other necessary public amenities. Prior to the erection of a town hall, town house, or meeting house (which served both religious and civic functions), town meetings were held in private homes, barns, inns, or schools. Town halls were built throughout the 19th and early 20th centuries, usually in the center of the main village in town, and ranged from simple, unadorned wood frame buildings to large masonry structures. Other buildings, usually churches no longer in use, were often remodeled to become town halls.