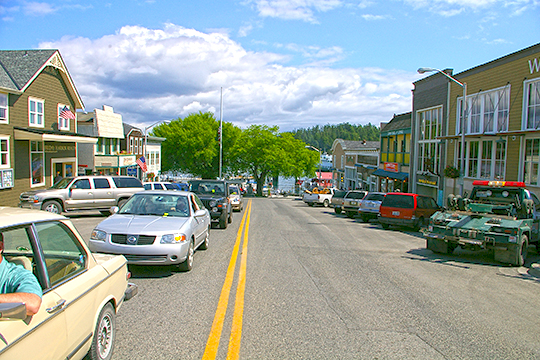 Hudson Bay Company employees came to the San Juans following the company's numerous international trade routes. One Hawaiian sheep herder and Hudson Bay employee, known as "Friday," settled in the area of what is now the town of Friday Harbor. This caused many to refer to the place as "Friday's Harbor." Friday Harbor (the 's' was dropped over time) was blessed with the right natural attributes—a protected harbor and good anchorage—prompting a handful of farsighted promoters to build the town's first general stores, hotels, and saloons. In 1873, Friday Harbor was named the county seat of the islands. (Another town naming story has a ship's captain shouting to shore "what bay is this?" and hearing the reply of "Friday" in response to the misheard "what day is this?")

By 1900 Friday Harbor boasted a population of three or four hundred residents. Road and telephone networks linked the town to the rest of the island. The community was growing, and by then had added a bank, US Customs, a weekly newspaper, drugstore, barber, a grade school, theatre, four large wharves and warehouses, a cannery, creamery, two churches, fraternal halls, and a number of handsome, substantial homes. What these buildings had in common was simplicity of design. They were attractive and functional, but without elaborate ornamentation or frills. Typically, both residential and commercial buildings were built with local timber. Money was not so plentiful that it could be used for the unnecessary, and so most buildings were painted white, more for functional protection against rot, than for decoration.

Sailing ships, and later, steamships came in and out of the harbor on a regular basis, hauling passengers, mail, and freight. They took the island's bounty: apple, pears, cherries, strawberries, peas, cream, eggs, chickens, grain, lime, timber and salmon "down (the) Sound."

In 1909 Friday Harbor became incorporated, and to this day has the distinction of being the only incorporated town in the islands. After incorporation, Friday Harbor came into its own, prospering and riding economic ups and downs. The vagaries of the marketplace, the Great Depression, World War II, the pea weevil, and competition from Eastern Washington growers brought about the decline of traditional island industries. Friday Harbor's fortunes declined with them. The town wore a pinched look until the late 1960s, when tourism, retirement, real estate, construction, the arts and a variety of cottage industries began to take hold.