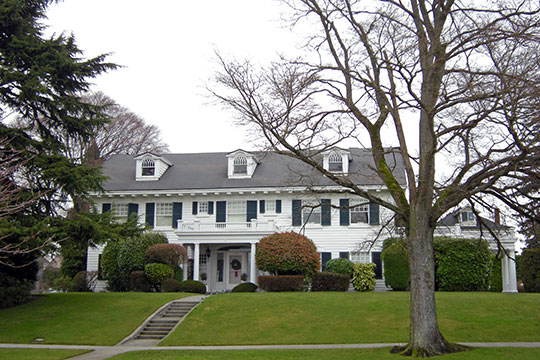 When the City of Everett was incorporated in the spring of 1893, plans for a city hall were made almost immediately. Temporarily, city government conducted business in rented chambers in the Clark Building at Hewitt Avenue and Wetmore until a new facility was constructed. Soon, a wooden building on Broadway, designed by Berglund and McKenzie, was completed. The police and fire departments and city library joined city council and the mayor in this modest structure which, although altered and expanded over the years, barely kept pace with the demands of a rapidly growing city.

Everett's population grew dramatically in the early 20th century. When first incorporated, the city had a population of 5,000, but by the turn of the century population had grown to 8,000 and by World War I had reached a figure four times greater. The booming economic prosperity of the 1920s brought still more growth to the community-and change to city government which had reorganized that decade into a commission form of municipal government. The need for a larger and more modern city hall to serve the municipality was a perennial issue among officials of the growing community. Logically, the prosperous years of the 1920s seemed an appropriate time to undertake the necessary capital improvements, but political struggles sidetracked plans for a new city hall until the end of the decade. When the effort finally got underway, the days of prosperity were almost at an end and, ironically, actual construction of the building coincided with the Wall Street crash.