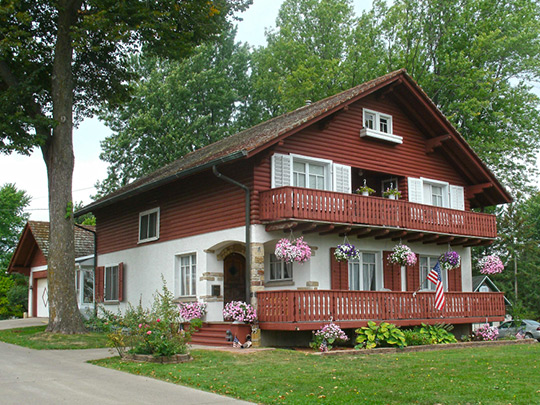 James O'Neill cleared fifty acres of timber in the area of the junction of O'Neill Creek and the Black River by 1850. He made the decision in April of 1855 to appropriate four acres of that land for the first village in Clark County, which was then named in his honor. He instructed surveyor Allan Boardman to plat the village into lots. Neillsville was designated the county seat in November of 1854 after a tumultuous election. The City of Neillsville was incorporated on March 28, 1882.

The pine forests continued to attract logging concerns and the community expanded in size in support of that industry. The arrival of Chicago, St. Paul, Minnesota & Omaha Railroad in 1887 signaled a guaranteed economic and population boom. In 1860, the population in the village of Neillsville was fewer than 250 people. By the turn of the century, the population grew to 2,104 and by 1950 the population was 2,663.

Since the milk was hauled in the early years by wagon, it was not feasible to haul to a company which involved a lengthy drive or the milk would spoil. Small privately owned cheese making factories sprang up every few miles. Some of the small local cheese companies and their cheese products were: Bartel Factory-American Cheese; Clark County Central Cheese Factory Cheddar Cheese; Dells Dam-American Cheese; York Center Cheddar and American Cheese; East Pleasant Ridge Dairy Swiss and Cheddar Cheese; Christie Cheese Factory, Globe Cheese Factory and Day Corners Factory. The Star Factory is still operating today as Lynn Dairy in Lynn, Wisconsin.

The Neillsville milk plants coupled with the many small cheese factories guaranteed a market for all of the milk the area dairy farmers could produce. Milk was a way of life for the small farmer in the Neillsville area for more than fifty years. Refrigeration allowed milk to be hauled greater distances and larger companies were forming, such as the John Wethrich Creamery Company (1904) in Greenwood, Wisconsin (sixteen miles north of Neillsville).