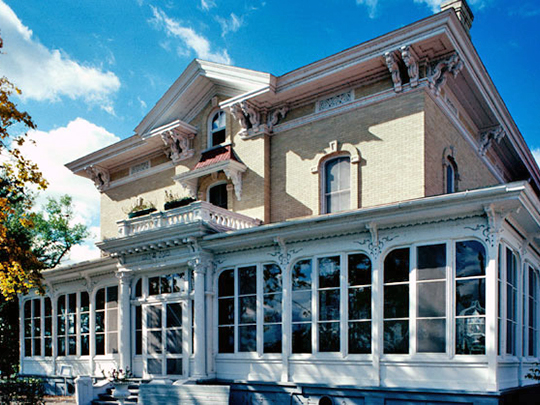 Crawford County is located in Southwest Wisconsin and is part of the Driftless Area, an area that escaped the most recent glacial advance some 10,000 years ago. The glaciers melted water created the Driftless Area that is known for its rugged topography creating scenic bluffs and valleys. The County is approximately 600 square miles in size. Its boundary on the west is the Mississippi River and its boundary to the south is the Wisconsin River. The County is bisected from North to South by the Scenic Kickapoo River.

The first known inhabitants of Crawford County were prehistoric Native American tribes, including the Ho-Chunk, Mesquakie, Sioux, Fox, and Dakota. Traces of their presence have enhanced the cultural history in the form of artifacts, archeological remains, and animal-shaped burial mounds, some of which are preserved for public viewing at Effigy Mounds National Monument across the river north of Marquette, Iowa.

Explorers Marquette and Joliet were the first European first explorers to arrive in Crawford County in 1673. Voyageurs, entrepreneurs, and traders of French, British, and American decent followed and developed military interests in the area. They explored the land and sought fortune, trading their goods at their annual meetings of traders and trappers still celebrated today. The French called the area 'Coulee de Male', hence the name of the area today as the Coulee region. Many stayed to live out their lives in this special area, and it soon became an established and well-known region.

Three Canadians of French descent came to be the first settlers in what is now Crawford County in 1781 Basil Giard, Pierre Antaya and Augustin Ange. Michael Brisbois came soon afterward followed by Pierre La Pointe who settled in the County in 1782. There is little information on Basil Giard. He was a Canadian trader and he died in Prairie du Chien in 1819 at about the age of seventy. Pierre Antaya was a farmer and a native of Canada. Augustin Ange came west as a voyageur but in time became a trader. Michael Brisbois also came from Canada to Crawford County. Pierre LaPointe, another native of Canada came to Crawford County in 1782. Pierre LaPointe was well educated and one of the best of Indian interpreters.

In 1816 Fort Shelby was captured by the British during the war of 1812 and renamed Fort McKay. The British relinquished their possession of Fort McKay after the Treaty of Ghent which led the way for establishing Fort Crawford as a new United States Fort.

Crawford County was created on October 26th, 1818, from a territory of the Michigan legislature. Named after William H. Crawford, a Georgia senator and James Monroe's Treasurer at the time, Crawford County covered the entire western half of Wisconsin. At this time, the County covered all land north of the Wisconsin River, but it was later divided to such an extent as to become one of the smallest counties in the state. In 1836 the County was transferred to the newly formed Wisconsin Territory as Michigan prepared for statehood.