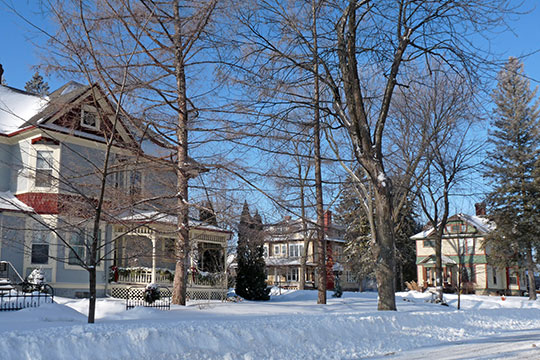 Eau Claire, a compact and busy industrial city at the confluence of the Eau Claire and Chippewa Rivers, as a narrow, crooked main street bright with plate glass by day, glaring with neon lights at night; its many factories lie back along the tracks that parallel the cramped and curving rivers.

In 1784 a trapper and trader named Le Duc was living here among the Sioux. Logging near the banks if the Chippewa began about 1822, and two decades later Jeremiah Thomas and Stephen S. McCann, first permanent white settlers, staked claims and built shanties here. In 1856, when word came that a railroad was to pass through, Eau Claire County was organized and settlers began coming in large numbers.

From the beginning the white pine of the Chippewa Valley became the foundation of prosperity in Eau Claire as well as in Chippewa Falls on the river above, and for years lumbering interests and rivalries determined the life in both cities. Soon after settlement an intricate series of conflicts arose over control of the many-branched Chippewa, main outlet for northwestern Wisconsin's wealth of timber. Dams and booms built at one place on the river impeded the drive of logs to other communities downstream; quarrels based on this economic fact soon grew into feuds. When Eau Claire men proposed to build a dam in 1860, Chippewa Falls interests fought the project in the legislature and courts for more than 15 years, only to lose eventually; and when Eau Claire sought incorporation as a city, Chippewa Falls again opposed strenuously but vainly.

The railroad was completed in 1870. Eau Claire County had shrewdly inserted "may" instead of "shall" into its promise to float a $60,000 bond issue to subsidize construction, and, consequently, was one of a very few Wisconsin counties that escaped paying heavily for rail service. At this time 22 saw mills operated in Eau Claire. Then, as logging declined along the Chippewa, paper and pulp mills began to replace the saw mills, and the flow of timber over the dam fell to almost nothing. In place of heavy saw-logs came pulpwood for paper and pulp plants; much of the water of the rivers was diverted to drive hydroelectric turbines. Factories making furniture, sashes and doors and other wood products sprang up. Today [1941] Eau Claire also produces kitchen utensils, farm machinery, books and stationery, mill tools, mechanics' supplies, sewer pipe, refrigerators, automobile tires and accessories. The Gillette Rubber Company Plant, the largest in the city, covers 3 city blocks and employs 2,500 men at peak production.