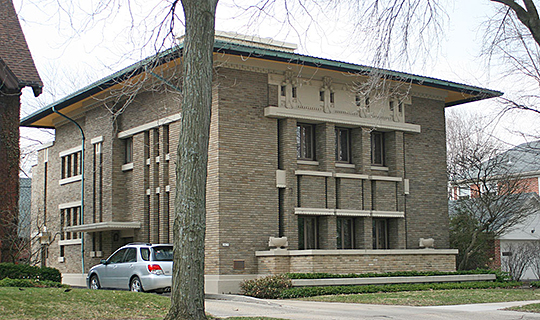 Milwaukee was founded at the confluence of the Milwaukee and Menomonee Rivers, which meet about one-half mile from the western shore of Lake Michigan. The geology of the area, like the entire Great Lakes region, was shaped, as we know it today, by glaciers which covered it at various periods. Prehistoric shorelines exist above the present lake level as terraces, wave-cut cliffs, and abandoned gravel and sand beaches. The soil is primarily glacial drift.

Originally, low wetlands comprised the banks of both rivers and the estuary extending to the lake, with the exception of a narrow strip of dunes along the lakeshore. The protected inland water and the abundance of fish and waterfowl attracted indigenous peoples even in prehistoric times. Prior to white settlement, Potawatomi and Ottawa Indians occupied the site, as evidenced by archaeological remains.

The rivers divided the area into three distinct sections, which influenced the pattern of original white settlement and development. Each was developed by different owners with separate plats. East of the Milwaukee River was owned by Morgan L. Martin and Solomon Juneau whose plat was filed in 1835. West of the river was developed by Byron Kilbourn and was also platted in 1835. The section south of the Milwaukee and Menomonee Rivers was plated by George H. Walker in 1845, although the plat was not recorded until 1854. Respectively each area assumed the name of its major proprietor: the eastside was Juneautown; the westside was Kilbourntown; and the southside was Walker's Point. In all three cases, the plats are typical nineteenth century gridiron plans with rectangular blocks, superimposed over the existing topography. The few exceptions were diagonal . streets which followed the Milwaukee River, or were pre-existing trails. Due to the separation of the three areas by the water courses, most east-west streets did not align and had different names.

In 1795 Jacques Vieau established a fur-trading post at Milwaukee, which he made his winter home until 1818 when Solomon Juneau, who had married his daughter, succeeded his father-in-law. Juneau is generally spoken of as founder of the city and was found by our early American settlers in possession of the site on which Milwaukee now stands. He first sold village lots to Milwaukeeans in 1835, and a Park and an Avenue in the City are named after him. Milwaukee was incorporated as a city in 1846; Wisconsin was admitted as a State, May 29th, 1848. By 1890, the population of Milwaukee was more than 200,000.

The material used for early building in Milwaukee was largely a cream-colored brick, from which the city was often referred to as "Cream City."