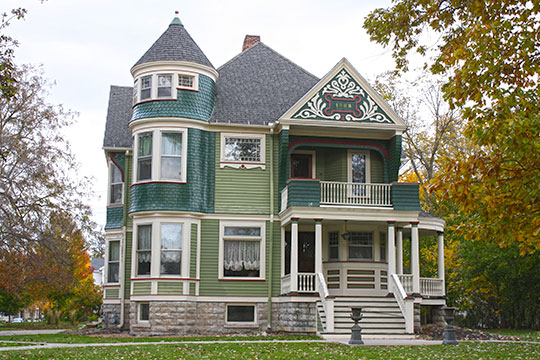 Oshkosh lies on a marshy plain where the Upper Fox River flows into Lake Winnebago. Woodworking plants sprawl along the edge of the Fox, their yards stopping abruptly at the river, which sucks slowly at piles reinforcing the banks. The Fox makes hardly an eddy as it flows into the shallow lake. Far across the lake the blue edge of the Niagara escarpment lies low against the sky.

Oshkosh is a confusion of winding and irregular streets. Four bridges, which swing open for tugs and freighters, connect dissimilar sections of the city. The South Side is a Main Street town of shops, warehouses and frame houses; the North Side preserves remnants of older and more elegant architectural styles. Here turreted public buildings, red brick and limestone trim, and office buildings of limestone or red brick stand as testimony to the energy of a young city that quickly rebuilt itself after the fire of 1875 had destroyed most of its business section. In the residential district, along Algoma Boulevard, which parallels the Fox River, are the austere wooden mansions built in the 1880s and 1890s. With glass-enclosed towers, large plate glass windows, and bracketed eaves, these houses stand empty and "for sale," their owners, many of them made rich by lumber, having left the city.

The citizens, businessmen, shopkeepers and industrial workers, represent a typical fusion of many different stocks. Among the early people who migrated to Oshkosh, vestiges of Old World customs soon disappeared. Only the German-Russians and Poles, immigrants of a comparatively late date, have closely-knit national groups. The forefathers of the German-Russians had entered Russia in search of religious liberty during the reign of Catherine the Great. By the 3rd quarter of the 1800s they were again subjected to religious and political persecution, and many of them migrated to America, some coming to Oshkosh. They are German-Lutherans, who through the years thy lived in Russia, never lost their German customs or tongue.

In 1670 Father Jean Claude Allouez stepped ashore from his canoe at a point in what is now Menominee Park, to read mass to the Indians. Though many explorers passed the site during the next century and half, it was not until 1818 that white men settled in the vicinity. In that year Augustin Grignon and Jacques Porlier established a trading post a mile below the present village of Butte des Morts as a midpoint stop on the Fox-Winnebago waterway between Fort Howard and Winnebago. In 1833, when the mail route between the Forts was shifted southeastward so that the trail crossed the Fox at a point below the floor of Lake Butte de Mortes—near the present West Algoma Street Bridge—George Johnson erected a trading post, consisting of two log cabins. On the site of this post grew the village of Algoma.

In the next three years this combined trading-post, tavern and ferry passed into the possession of James Knaggs, a half-breed, who named the post for himself and sold it to Webster Stanley. In 1836 Governor Dodge, returning from Cedar Island where a treaty had been concluded with the Indians, crossed the Fox River at Knaggs' Ferry; Webster Stanley and his partner, Chester Gallup, learning that the treaty of the Cedars had terminated Indian possession of the territory north of the River, immediately laid claim to the angle of land between the north bank of the Fox and Lake Winnebago, the site of the future city of Oshkosh. A year later (1837) this small community on the shore of Lake Winnebago, now composed of the Gallups, Stanleys, Wrights and Evanses, was known as Athens.

During the next decade Algoma and Athens were rivals in the developing lumber industry, and it was a question which of the two would absorb the other. In 1839 Conrad Conn built the first sawmill near Knaggs' Ferry in Algoma; in the same year the government offered to establish a post office at Athens. At the election in 1840 to determine the official name of the post office, fur traders from the Butte des Morts vicinity, foreseeing practical advantages in flattering the Indians, stampeded the rest of the population with arguments and drink into renaming Athens in honor of the Menominee chief, Oshkosh. A new stimulus development of both Algoma and Oshkosh came in 1844, when the Manchester, first of a long line of freight and passenger boats plying the Fox-Winnebago waterway, began carrying merchandise between Fox River ports. Three years later, two steam sawmills were built—one in Oshkosh, one in Algoma—and the lumber industry began to assume real importance. The rivalry between the two villages continued. In 1848 Algoma acquired the first grist mill, but in 1850 Oshkosh contained a sash factory, tannery, brewery, wagon and carriage shop, and foundry. Oshkosh had been the county seat for six years when in 1853, it was incorporated as a city with a population of 2,500. Continuing to grow, the city in 1856 absorbed the village of Algoma as the Fifth Ward. In the autumn of 1859 the first railroad came to Oshkosh and soon took the major burden of freight away from the schooners which plied between Lake Winnebago ports. For several decades, however, water transportation continued, and boat building remained an important industry.