Photo: View from the Alderson Historic District, Alderson, WV. The Historic District was listed on the National Register of Historic Places in 1993. Photographed by User:CZmarlin (own work), 2009, [cc-by-3.0 (creativecommons.org/licenses/by/3.0)], via Wikimedia Commons, accessed July, 2015. 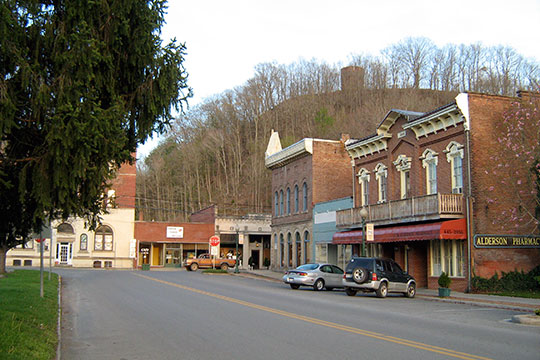 Monroe County was created in 1799 from part of Greenbrier County.

Monroe County is a sparsely settled community that has remained under the influence of an agricultural economy. We have no four lane roads, no traffic lights, and no franchise "box stores." We have three incorporated communities in the county: Alderson, Peterstown, and Union. Alderson is a split town residing partly in Monroe County and partly in Greenbrier, divided by the Greenbrier River. The Monroe portion is an old established town, contains several historic homes and buildings, and has minimum sprawl. The town of Peterstown borders the Virginia line in the Southwest corner of the county, it serves as a residential community for many persons who work out of county or out of state, and it has maintained many of its small town businesses but is experiencing significant growth and sprawl. Union is the county seat, has significant historic homes and buildings, has maintained its small town businesses within the town therefore maintaining its town boundaries, and is experiencing limited growth. There are several smaller non-incorporated communities scattered throughout the county, and each has its share of unique architecture, history, and culture. [1]

Artifacts indicate that prehistoric tribes of Native Americans may have lived in the area which would later become Monroe County. Upon the arrival of the first Europeans, however, there were no permanent native settlements. Various tribes were leading periodic hunting expeditions into the region, when the scattered cabins of white settlers began cropping up around 1760. Agriculture and timbering soon became the mainstays of these early European settlers. Towns began to appear in the late 1700s, and became centers of administrative, judicial, and commercial activities. Individual landowners controlled the very modest growth for over 200 years. Communities were well defined, and rural areas were maintained as places to conduct farming and timbering. Mineral extraction has never played an important role in the county, and coal is not known to exist within Monroe's borders in quantity or quality sufficient for mining.