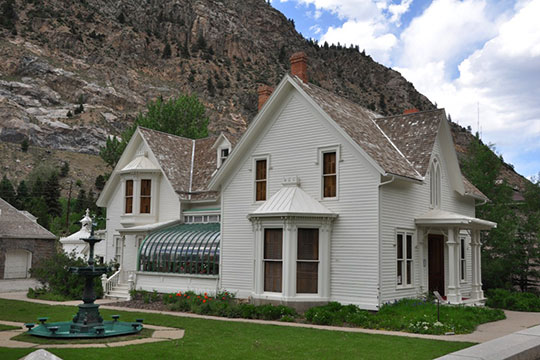 Georgetown, walled in by high barren mountains where the valley narrows at the foot of the Continental Divide, is the seat of Clear Creek County, which produced more than $90million in gold, silver, copper, lead and zinc up to 1939. The town came into existence with the discovery of gold here in 1859, and prospered until placer claims gave out. A period of stagnation was followed by a boom in the 1870s when lode mining was developed. Prior to the great Leadville strike in 1878 it was the most important silver camp in Colorado.

In its heyday the town attracted many questionable characters, but the camp was not marked by the rowdyism and violence that prevailed elsewhere. Old-timers maintain that the climate is so healthful that it was necessary to hang a man in order to start their cemetery. Among the curiosities of that day was a sign over a saloon, "We sell the Worst Whiskey, Wine and Cigars." A sign painter, angry at the proprietor and knowing that the man could not read, thus gave vent to his feelings; it attracted so much attention that the saloonkeeper let it remain until his death.

With the decline of silver mining in the 1890s, Georgetown entered a second decline. A few prospectors, some gold miners and many tourists kept the town alive. Curio hunters ransacked uninhabited houses in search of relics of bygone days. One man rented a stable for a summer studio and found files of several of the State's earliest newspapers thrown into an attic as rubbish. In 1933 higher prices for gold and silver caused many mines to reopen. Houses and picket fences are now brightly painted, set off by bluegrass lawns. Livery stables have been transformed into garages and filling stations. But the old Fire Station, a tall wooden tower in the center of the village, still houses an outmoded hose reel, a two-wheeled vehicle pulled by volunteer firemen.

The Hotel de Paris, one of the most celebrated hotels west of the Mississippi during the 1880s and 1890s, retains some suggestion of its former glory. Its rococo elegance of furnishing and decoration, its exotic cuisine and its curious owner were talked of throughout the mountain region, where opulence was common but discriminating taste was not. Louis du Puy, its builder and presiding genius, was born Adolphus Francis Gerard at Alencon, France in 1855. He has been described as "an innkeeper who hated his guests, a philosopher and poet who left no written record of his thought, a despiser of women who gave all he had to one, an aristocrat, a proletarian, a pagan, an arcadian, an atheist, a lover of beauty and, inadvertently, the stepfather of domestic science of America."

The last title because of the influence of his knowledge of food and wine had upon Dr. James E. Russell, high priest of domestic science in America, dean of the Teachers' College of Columbia University, who first gave domestic science academic status. The idea was born during a visit to the Hotel de Paris in 1896, when Russell was fascinated, as he confessed, by Du Puy's philosophies concerning food and man. "French Louis" tastes were epicurean to the extreme; a French guest once remarked, "I would have slave girls and music at dessert; with my wines I would have the ceiling to open and orange blossoms and roses to fall upon the table." His host answered, "I make one to smell the roses and imagine the slave girls by my wine!"

He was altogether a strange type to find in a frontier town, and there was a fantastic life behind him. Born to wealth and position, he squandered his inheritance and then tried journalism in Paris, London and New York with different success. He served in the French and American armies, deserted from both, drifted through a succession of odd occupations and, inevitably, would up in the mining camps, taking the name Du Puy. He came to Georgetown in 1869 and was seriously injured in a mine explosion four years later.

A collection was taken up to establish him in business, and the Hotel de Paris was the result. In 1875 Du Puy bought the Delmonico Bakery building on Alpine Street, excavated cellars and added another story to provide space for eight bedrooms, each 12 by 20 feet, divided by a large, central hall. He did almost all the work himself. Although the building was ready to be opened at Christmas, work continued for another year before Du Puy was satisfied. The two-story hotel is built of huge block bricks, with lintels and facades of brown stone, crowned with a cheval-de-frise of golden spikes. A wide wooden verandah, garnished with scroll work, occupies one whole side of the building. There formerly was gilt on the lion guarding the gate, on the metal stag decorating the wall, the heroic statue of Justice on the peak of the roof; there was more gilt on the legends "Hotel de Paris" and "Louis du Puy" emblazoned over the doors. The inner decorations were lavishly Parisian—mirrors, sculpture, paintings, hangings, and more gilt; many of these trappings remain.