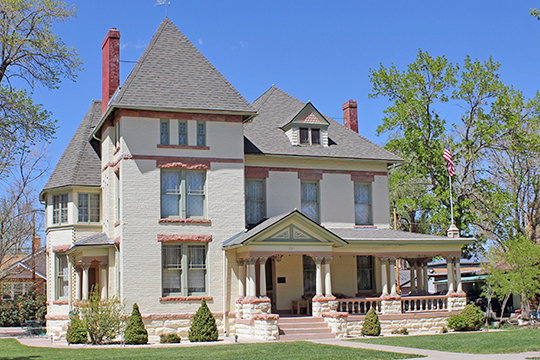 The City is located in a mountain bowl along the Arkansas River valley as it flows east from the Rocky Mountains and the mouth of the Royal Gorge. A combination of unique geography and an elevation of 5300 feet above sea level protects the city from harsh weather conditions, making Cañon City "the Climate Capital of Colorado," with temperatures generally 10 degrees warmer than other nearby Colorado communities. [1]

Environmental factors entered the thoughts of William Kroenig, a native of Weshpalia, Germany, who located the townsite of what would become Cañon City in 1859. Kroenig had been farming along the Huerfano River and when news of the gold rush reached him, had quickly realized the potential of supplying the thousands of gold seekers. He was first involved in the development of Fountain City (Pueblo), but when that city languished, moved to the more favorable location east of the Grand Canyon of Arkansas. At this spot Kroenig and his companions established the "Gate City to the Mountains" ... supply and layover center at the entrance to the mining areas.

Cañon City, as the Gate City was named in reference to its proximity to the Grand Canyon, flourished once the gold strikes in South Park (1895) and California Gulch (1860) became known. Just as Kroenig had envisioned, the freighters, carrying supplies for the ever-increasing mining population, were halted by the rugged mountain terrain immediately north and west of the new community and forced to store their stock in sheds. Traders were often called upon to carry the goods directly to the mining camps. As this transportation system matured, it formed the nucleus for the growing settlement.

Designated the county seat of Fremont County in 1862, Cañon City was well established by the 1870s, despite a temporary setback during the Civil War years. In 1871 the territorial prison was constructed at the foot of the Dakota Hogback and a year later the town was officially incorporated with George Rockafellow as the first mayor. Continuing as a major commercial center for the mining areas to the north and west, the community also prospered through the development of the resources in the surrounding area. As early as 1860, agriculture had flourished in the region owing to the ready market provided by the mining camps. Agricultural growth was assisted by an extensive irrigation system (an irrigation ditch runs through Cañon City itself) which by 1880 had brought approximately 15,000 acres under cultivation. Fruit growing, too, contributed to Cañon City's vitality. The state's first fruit tree nursery was established near present day Florence and its successes were repeated by several Cañon City residents who planted orchards primarily south of the river.

Significant amounts of coal and oil were also found in Fremont County. The high grade coal along Coal Creek south of Florence enticed General Palmer's Denver & Rio Grande Railroad to the site in 1872. By the turn-of-the-century, additional coal discoveries south of Cañon City and Florence had prompted the development of several small communities, including Rockvale, Bookside, Chandler, and later Prospect Heights. Oil, first discovered on Four-mile Creek in 1860, became important more than twenty years later when a second discovery on Coal Creek led to the establishment of the Arkansas Valley Oil and Land Company and a refinery in Florence by 1885.

A critical factor in the growth of Cañon City and Fremont County as outlined above was a railroad connection. The Denver & Rio Grande Railroad had reached the Coal Creek coal field in 1872 and to Cañon City residents it seemed only a matter of months before they too were part of the narrow gauge system. Yet the Panic of 1873 intervened and it was not until the community furnished the railroad company with an additional $50,000 that the line was completed, entering Cañon City in July of 1874. Although not intended, Cañon City remained the western terminus of the Denver & Rio Grande while the famous Royal Gorge War was waged in the courts. Finally triumphing over the Atchison Topeka & Santa Fe Railroad in 1880, Palmer's railroad tapped the lucrative Leadville traffic in the same year.