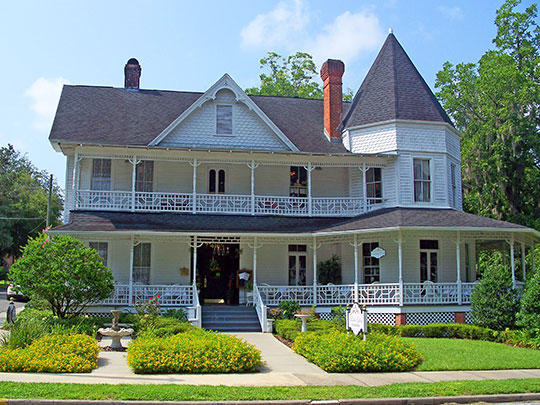 Ocala, seat of Marion County, is a busy trading and shipping center for truck growers and phosphate- and limestone-mining companies. The town has the vigorous bustle of a modern northern city, although the square in the center of the business and shipping district, with its courthouse, huge oaks, and subtropical foliage, is typical of nineteenth-century Florida. The town's name is a corruption of Ocali (meaning water's edge), the name of a near-by Indian village through which De Soto passed in 1539 on his march northward through Florida.

In 1825 an Indian trading post was established about two miles east of the townsite; in 1827 the post was manned with troops and named Fort King; during the Seminole War the fort was headquarters for central Florida. Here, on April 3, 1835, Wiley Thompson, an Indian agent, called a council of chiefs to explain the Government's intentions of enforcing the 1833 treaty in which Indian leaders had agreed to emigrate to the Indian Territory. When an Indian named Jumper, speaking for Chief Micanope, declared his people would never sign the treaty, Thompson immediately prohibited the sale of arms and ammunition to the Indians. Thereupon the colorful Indian leader, Osceola, declared: "Am I a Negro slave? My skin is dark, but not black. I am an Indianoa Seminole. The white man shall not make me black. I will make the white man red with blood, and then blacken him in the sun and rain, where the wolf shall smell of his bones, and the buzzard live upon his flesh."

The following October Osceola and his followers executed Charley Emathla, a Mikasuki chief who had favored emigration, and scattered to the four winds the money Charley had received from the sale of his cattle to the hated white men. Thompson then threatened the Indian chiefs with withdrawal of annuities unless the emigration treaty was signed. Osceola rose dramatically and pinned the treaty to the desk with his dagger, crying, "This is the only treaty I will ever make with the whites!" The treaty, still preserved in the National Archives Building in Washington, plainly shows the cut through three leaves made by Osceola's dagger. On December 28, 1835, Osceola appeared at Fort King and killed Thompson and Lieutenant Constantine Smith, and on the same day Major Dade and his entire command were annihilated by an Indian band on near-by Withla-coochee Elver. Thus began the Seminole War, which continued until August 1842.

When the first white settlers came into this section, acres of wild orange groves studded the rich hammock lands. After the Seminole War standard varieties of citrus fruits were introduced. During the subtropical expositions held in Jacksonville between 1888 and 1891, displays of fruits and winter vegetables caused much favorable comment, and are said to have aroused northern interest in Florida citrus.

By legislative act Ocala became in 1852 the seat of the East Florida Seminary, the first institution of learning established by the State; the school was later removed to Gainesville.

Ocala boomed in 1935 when work started on the Gulf-Atlantic Ship Canal. Tents and shacks were hurriedly put up in the environs to shelter newcomers and provide temporary quarters for new business enterprises. Camp Roosevelt, constructed nearby to house an army of workers, became a city in itself. Festivals, bands, sound trucks, and a flood of oratory enlivened elections on the question of whether or not the right-of-way should be provided at county expense; a bond issue of $1,500,000 was finally voted for the purpose. Although WPA supplied most of the labor, the unemployed in Florida and surrounding states, together with tradesmen, promoters, gamblers, and others attracted by visions of quick money, converged upon the town in large numbers.