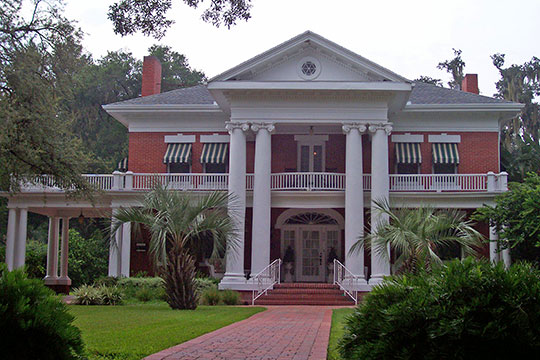 White settlers began to move into Central Florida shortly after the end of the Second Seminole War (1835-1842), prompted in part by the passage of the Armed Occupation Act which granted 160 acre homesteads to settlers who would maintain residence on the property for five years and resist Indian raids. A number of the settlers moving into the area, however, were squatters who often violated treaty agreements with the Seminoles by seizing reservation lands. Conflicts between the Indians and these unauthorized residents led to renewed warfare. The community of Bartow developed on the site of Fort Blount, which was established in 1853 as a refuge for settlers against Seminole raids that eventually precipitated the Third Seminole War (1855-1858). The legislation resulted in an increase in population that brought about the creation of new counties in the region. Polk County, named in honor of President James K. Polk, was created from portions of Hillsborough and Brevard counties in February, 1861, on the eve of the Civil War.

The county had various county seats until Bartow was chosen as the permanent location of the county government in 1866. There was little military activity in Polk County during the Civil War, and Bartow began to emerge as a permanent community shortly after the end of the conflict. The first town plat was drawn up in July, 1866. It consisted of eighteen streets set in a grid pattern which became the basis for subsequent development. Included in the plat was the site of the original courthouse. The settlement acquired a post office in 1869 and was officially known as Peace Creek, until the name of the town was changed to Bartow ten years later.