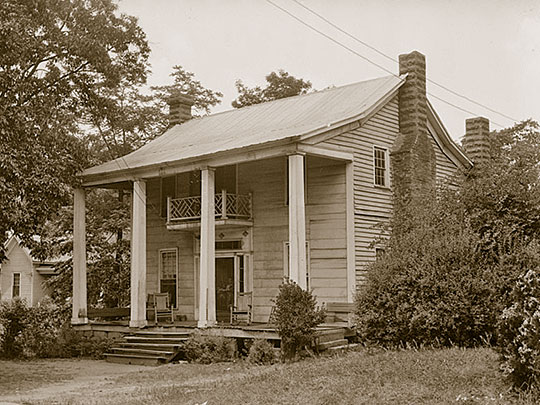 Jefferson, the seat of Jackson County, was created in 1796. The town was incorporated in 1806 and had several hundred inhabitants when, on March 30, 1842, Dr. Crawford Long [1815-1878] performed here the first operation in which sulphuric ether was used as an anesthetic. Two markers, on the front of a red brick store on the west side of the public square, indicate the site of Dr. Long's Office where the operation was performed. Many persons claim, however, that it occurred out of doors under a mulberry tree that stood in front of the office. When this tree was removed several years ago, souvenirs were made from it.

After receiving his medical education at the University of Pennsylvania and serving his internship in New York, Dr. Long came to practice in Jefferson. On numerous occasions he inhaled ether for its exhilarating sensation and, when others learned of its effect, "ether parties" became fashionable. According to Dr. Long's own account, after James M. Venable had consulted him on several occasions about removing two small tumors from his neck: "... I mentioned to him ... the probability that the operation might be performed without pain, and proposed operating on him while under the influence of ether. He consented... The ether was given to Mr. Venable on a towel, and when fully under its influence, I extirpated the tumor. He gave no evidence of suffering during the operation, and assured me after it was over that he did not experience the slightest degree of pain from its performance."

Dr. Long remained in Jefferson for 11 years before he moved to Athens, where he lived from 1851 until his death in 1878.

The Harrison Hotel, southeast corner of the square, was built about 1835, probably by Joshua A. Randolph. This 2-story, gray frame Greek Revival structure has verandas running the full length of the facade on both floors, forming a square-columned portico.