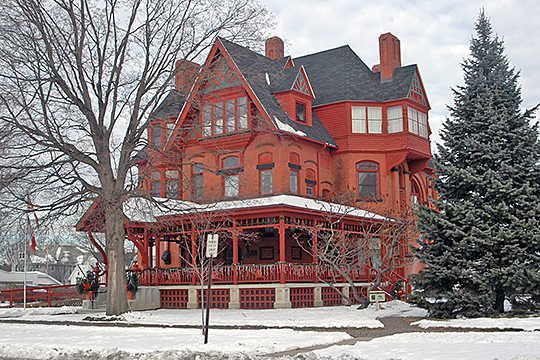 In 1835 a riverboat pilot by the name of Elijah Buell crossed the "greatest national highway" (as the 1875 Andreas Atlas referred to the Mississippi River) at what was known as the "Narrows" and settled on the west bank. Here, with John Baker on the Illinois side, he established a ferry crossing (the Fulton-Lyons Ferry). Two years later, in 1837, Buell was joined by George Harlan, Dennis Warren, Chockley A. Hoag and Sue Foster in the laying out of a town. Named Lyons in honor of the city in France the "pretty little village" grew slowly until 1855 when it was incorporated. The Lyons Mirror was established in 1854 and it proudly chronicled the development of the community. From a few hundred inhabitants in 1854, the town grew to 3,000 by 1858. This growth was due in large part to the belief that a railroad would soon be built through the community, with a railroad bridge across the Mississippi. The Iowa Central Railroad was organized in 1852, but failed just two years later. The Mirror noted in 1856 that another company, the Iowa Central Air Line Railroad Co. was trying to raise money. The financial panic of 1857 brought an end to the talk of the railroad crossing at Lyons.

Although the railroad bridge across the Mississippi was built at Clinton in 1865, the first wagon bridge across the Mississippi in this area was built at Lyons in 1891 (this Lyons-Fulton High Bridge was demolished in 1975). The Clinton wagon bridge opened for use a year later, in September 1892. While both towns fronted on the Mississippi, there was an area of about 260 acres between the two that had been incorporated as the town of Ringwood. Ringwood was annexed by Clinton in 1878, and the village south of Clinton known as Chancy was annexed in 1892. This left Lyons as the only separate community along the riverbank. After much discussion, and dissension, the issue was put before the voters in 1895. Annexation was approved by a two to one margin. Consolidation did not take place overnight however. Street names between the two communities were not coordinated until 1927 and two separate school districts existed until 1947. Even today, when asked where they live, many inhabitants of the northern part of Clinton will tell you that they "are from Lyons."