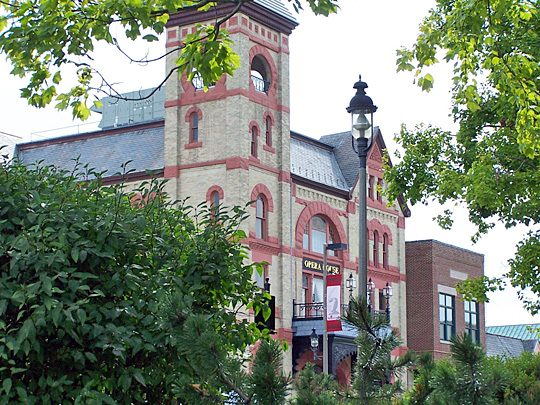 The first European settler arrived in the Woodstock area in 1834, the year after the village of Chicago, 70 miles to the east, was incorporated. The surrounding countryside, rolling hills of glacial deposit and loess, was covered with a patchwork of prairies, oak groves and hardwood forests, though this was soon to be transformed into farmland. Farming is still the major occupation and preoccupation of McHenry County, and rich dairy farms still surround the town of Woodstock, though suburban encroachment from Chicago has already reached the western part of the county.

Originally named Centerville in 1844 when it was made the new county seat, the name was changed to Woodstock at the suggestion of Joel Johnson, an early settler, in 1845.

When McHenry County was divided into political townships in 1849, Woodstock became part of Dorr Township. Incorporated as a village under Illinois law on June 22, 1852, it grew slowly but steadily. By mid-century the square was surrounded by a group of mostly detached, one and two story frame buildings, many displaying pattern book Greek Revival details. The several hotels provided resting places for visitors with business at the courthouse, while the wide streets around the square were the scene of a farmers market every Saturday.

The Chicago, St. Paul and Fond du Lac Railroad (later part of the Northwestern system) reached Woodstock in 1855, and in 1856, was finished to Harvard. The location of the tracks through downtown Woodstock, a block northeast of the square, had some affect on subsequent commercial development and, eventually, business blocks were built along Benton and Main, north to the depot at Church Street.