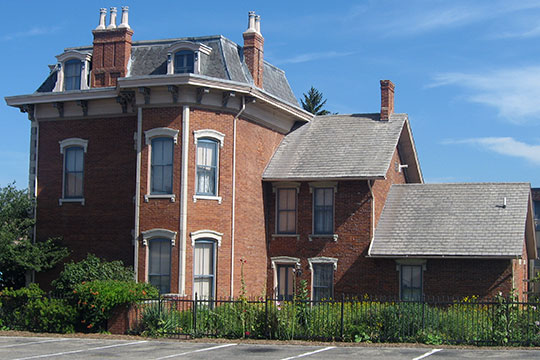 Native American peoples lived in the Anderson/Madison County area at least intermittently for many centuries, building mysterious mounds along the White River. Ten of these earthworks, built by Indians of the Hopewell and Adena cultures shortly after 500 A.D., remain in Mounds State Park. Continuous occupancy of the future City site began with the Lenni Lenape or Delaware Indians, the residents of this area before the first European settlers arrived. Principal chief of the Delaware was Kikthawenund who, according to one story, was converted to Christianity by a missionary named William Anderson. Adopting the missionary's name, he was known as Chief or Captain Anderson. His village, on the west bluffs of the White River, was referred to as Anderson's Town. He lived in a double log cabin near what is now Eighth Street and Central Avenue. An Indian burial ground was located near the present St. Mary's Church and another at the north end of the present City Hall. The last of the Indians left Madison County, pursuant to the provisions of the Treaty of St. Mary's, in 1821. Anderson was platted on the site of the former Indian village in 1823 by John Berry, one of the first settlers in the community. To stimulate development, he dedicated land for public buildings, including a courthouse. This enabled the town to become the first declared seat of Madison County government on May 21, 1827.

In 1838 the construction of the Central Canal, a branch of the Wabash and Erie Canal, started a modest burst of population growth. The "Town of Andersontown" was first incorporated in 1839 with a population of 350. Within seven years, the town name was changed to "Anderson." The boomlet broke when the canal was abandoned in 1839. Remnants of a secondary hydraulic canal are visible along the north side of White River east of Scatterfield Road. Anderson was incorporated again as a town in 1849 and 1853, and finally as a city in 1865.

Anderson developed as a significant rail transportation hub after 1852, with the arrival of the Indianapolis Bellefontaine Railroad, and other later rail lines. This contributed greatly to the development of the City as an industrial center.

Real growth began in 1887 with the discovery of a natural gas field underlying east central Indiana. The abundance of an inexpensive fuel supply attracted major industrial development and resulting population and commercial growth. Between 1880 and 1910 the City's population grew from 4,126 to 22,476. Growth trends began to slow again when the gas deposits began to run dry in 1912. Many of the factories dependent on cheap fuel closed, but the Philadelphia Quartz Works (now known as the PQ Corporation) relocated to Anderson in 1889 and is still in operation in the City. Other contemporary reminders of this period are also evident today along historic West 8th Street, where numerous large homes reflect the prosperity of the period.

As the supply of natural gas diminished, a new developmental force began impacting economic growth in Anderson. Between 1905 and 1918, as many as 12 different makes of automobiles were manufactured in the City. This role ended as Detroit became the nation's automotive capital. The future of Anderson was not in the manufacture of automobiles, but rather in the production of parts for them.

In 1896, two brothers formed the Remy Electric Company in Anderson. They invented an ignition system for the automobile that was a major technological advancement for the time. In 1918 the General Motors Corporation bought out the Remy Company and combined it with some of their other electrical businesses to establish the Delco Remy division, headquartered in Anderson. The City soon became one of the leading electromechanical technology centers in the world. All General Motors ignitions were manufactured here, and another division located in Anderson (Guide Lamp), produced most of the lighting systems for GM vehicles. For almost the next 60 years, Anderson's economic health would be tied to General Motors and automotive parts manufacturing.