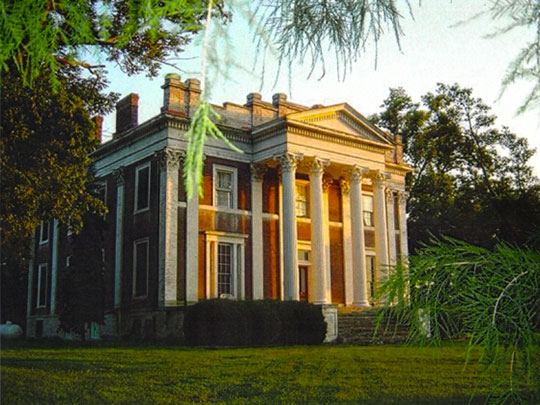 Georgetown, with its many large trees and old houses, is a college town and the seat of Scott County. Incorporated by the Virginia Legislature in 1790, and named for George Washington, the town grew up around and still obtains its water supply from Royal Spring, one block from the highway on Water Street. The spring was discovered and named, in 1774, by Col. John Floyd, a pioneer adventurer and surveyor, who was impressed by the volume and crystal clearness of its water and by the beauty of its setting.

In 1775, John McClelland, a landowner residing near Pittsburgh, accompanied by his family and several frontiersmen, floated down the Ohio River in flatboats to Salt Lick Creek, now in Mason County. Here they were joined by Simon Kenton and Thomas Williams. When they reached the Royal Spring in 1776 they built here. This became an outpost of civilization in the wilderness where pioneers, passing to and from the larger settlements south of the Kentucky River, found refuge and shelter. McClelland's Station suffered from frequent Indian attacks; one of these, in December 1776, was led by the famous Mingo chief, Pluggy, who was killed during the fight. After the Indians had been driven off, Pluggy was buried on the bluff that overhangs the spring. For many years superstitious inhabitants of the settlement believed that the echo in the spring was the death cry of the Indian chief.

On College Street is Georgetown College, a Baptist institution, established in 1829; it has a campus of 20 acres, an enrollment of approximately 600 students, and awards the bachelor of arts degree.