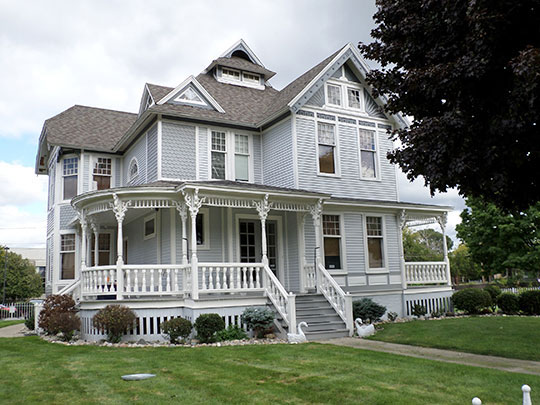 The Canadian fur trader Jacob Smith founded Flint in 1819. Attracted to the shallowest crossing point in the Flint River, Smith built a trading post at this "grand traverse," which is now present-day Water Street. Smith's trading post capitalized on a key passageway between Detroit and other parts of the state.

Smith was not Flint's first resident, however. For generations, Native Americans such as the Sauks, Ottawas, and Chippewas occupied areas in and around present-day Flint. At the time of Smith's arrival, there was a Chippewa village northwest of Flint near Montrose. There was also a gathering place in Flint called "Muscatawingh," meaning "open plain burnt over."

A great council in Saginaw, between the Chippewa and the territorial governor, General Lewis Cass, led to the sale of six million acres, including present-day Flint, to the U.S. government and settlers in 1819. Over the next few decades, pioneers from the east, aided by the completion of the Erie Canal and the promise of ample land, moved to the "Flint River Settlement" to farm, hunt, and trade.

The area continued to experience growth, and by 1855 was home to around 2,000 residents. That same year, the settlement was formally incorporated by the State of Michigan and officially named Flint, likely after the Native American name for the Flint River which translated into "river of flints." Shortly after its incorporation, residents elected the City's first mayor and council, and established a fire and police department.

In addition to its strategic position in the fur trade, Flint's expansive and dense forests made it an attractive location for lumbering. Sawmills quickly sprouted up as Flint became a lumbering boom town. Henry Crapo's sawmill, for example, employed sixty people and cut twelve million feet of lumber, annually. By 1870, Flint was home to more than 5,000 residents, 100 stores, 18 lumber dealers, and 11 sawmills. Lumbering created a cadre of expert carpenters in home construction, cabinet making, and other key wood industries which stimulated economic growth for the City.

Since Flint's lumbering was a local enterprise, profits for the most part remained in the community and were available for reinvestment and development in other technologies, including carriage making.

Flint's entrepreneurs recognized a pent-up nationwide consumer demand for a new mode of transportation—farmers required wagons to move and sell their crops, businesses needed vehicles to transport wares, and families sought travel into and around town. With the availability of lumber dwindling, the local economy reinvented itself through carriage manufacturing.

In 1869, the first of Flint's "Big Three" carriage companies was founded by the Patterson brothers, William and A.B. By 1901, the Pattersons employed 350 people and built 23,000 vehicles annually. The second, Flint Wagon Works, transitioned directly from lumbering operations to large scale carriage construction. Most famously, William Crapo Durant ("Billy") and J. Dallas Dort founded the third in 1886 in what would become the Durant-Dort Carriage Company, a global leader in carriage production and the foundation for General Motors.

At the dawn of the twentieth century, 13,103 residents called Flint home, and its companies manufactured more than 150,000 wagons annually.

The carriage business created an entrepreneurial scene in Flint akin to Silicon Valley and planted the seeds for Flint's transition to the "horseless carriage," or automobile industry. In 1900, the first automobile built in Flint, Charles Wisner's "buzz wagon," debuted before 10,000 spectators at the Flint Labor Day parade. Just two years later, A.B.C. Hardy manufactured the City's first fleet of autos, producing the $750 to $850 Flint Roadster. However, it was not until 1903, when the Flint Wagon Works bought the Buick Motor Company, that the Flint Journal declared that "a splendid new manufacturing industry is now assured for Flint." Billy Durant was brought onboard at Buick in 1904 and quickly persuaded Charles Stewart Mott's axle company to relocate from New York to Flint. In 1908, Durant founded General Motors (GM) and purchased Buick and Oldsmobile. Within the next several years, Durant purchased dozens more companies such as Chevrolet, Cadillac, Oakland (precursor to Pontiac), and AC Spark Plug and reorganized them under the GM umbrella. Flint made its last carriage in 1917 and by 1927 Buick was producing 240,000 cars annually.

Flint's population, wealth, and diversity rose steadily with the burgeoning automobile industry. In 1900, Flint's population was only 13,000, but by 1910, it skyrocketed to 38,500; 91,600 in 1920; and a remarkable 156,500 in 1930. Immigrants and southern blacks were larger drivers of these numbers, flocking to Flint to work in its factories. The list of Flint congregations from the time period illustrates the City's diversity.

The City also saw a building boom in the 1920s, with rapid construction of some of Flint's most famous structures: Central High School, Durant Hotel, Capitol Theatre, the Civic Park neighborhood, and the Mott Foundation Building.